We review Slide Blast, a family freindly tile laying board game that tasks players with trying to create the longest waterslide in the water park. With easy to learn rules and a quick play time, Slide Blast fits well into its niche. 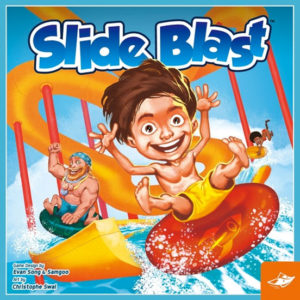 I can’t even tell you the last time I was on a waterslide. While they were a staple of my childhood (we are only a few hours away from the Waterpark Capital of the World), I just don’t really find the time any more as an adult.

So I guess I need to live vicariously through a new game from publisher Fox Mind (Get Rich Quick) called Slide Blast. In this tile laying game, players are trying to create the longest waterslide in the park. Simple, quick, and looks like a blast (pun intended).

Slide Blast is a tile laying game for 2-6 players that takes about 20 minutes to play. Slide Blast plays well at any player count.

Choose a player color, shuffle the slide tiles, draw one and you are good to go. Much like a day at the water park, learning to play Slide Blast is a simple and casual affair.

Every player starts with their meeple at the top of their slide on the start tile. On a player’s turn, they draw one tile (giving them two to choose from) and choose one to add to their slide. There are three rules that must be followed:

After you place your slide tile, move your meeple along the slide (making the obligatory “whoosh” sound) to the end. If you placed a tile so that you also move another player’s meeple, you collect a token. These awards points at the end on a sliding scale.

Other than the normal tiles, there are a few specialty tiles including oversized ones, speed tiles, and a tunnel.

Once the draw stack runs out, players count up the length of their slide (one point per section) and tokens. Most points wins.

Regular readers to the site will know that I’m a massive fan of tile laying games, especially ones where I get to build something. It’s the sense of accomplishment that comes at the end of the game when you get to sit back and admire what you’ve created. And Slide Blast does a great job of keying into that feeling for me. When the game is complete, you’ve created a massive waterpark with slides that twist and turn, and frankly, make me want to ride them.

If it wasn’t obvious from the overview above, Slide Blast is a light, casual, family friendly game. Didn’t think a tile laying game could be lighter than Carcassonne? Turns out it can! And I have no problems with how light of a game Slide Blast is. In fact, for as light as the rules are, everyone I have introduced Slide Blast to has really enjoyed it. It’s easy to learn, fun to play, and has some great components that really bring home its summer fun theme.

Heck, even with 6 players, the downtime in Slide Blast is manageable. With only two tiles to choose from on your turn (and only one place to play it), no one should be suffering from analysis paralysis while playing. Turns will go by quickly, making it a great game to close out a game night or play as a filler game.

When it comes to player scaling, Slide Blast actually plays fairly different depending on the player count. With 2 players it’s a very strategic affair as you carefully position your tiles to get the maximum length on your slide. Most of the time, you rarely, if ever get near enough to your opponent to move them.

And at the higher player count, Slide Blast can turn into a crazier, chaotic game. The board state will change so much between your turns that there is no point in planning ahead. You’ll be encountering other players a lot more, giving you plenty of chances to earn the bonus tokens (which I thought was a great mechanic).

My only compliant with Slide Blast is that I’d like to see more variety in the tiles. Not counting the high speed tiles, there are a total of 4 special tiles in the game. 3 of them let you place a large, triple sized tile, while the fourth is a tunnel. I really like adding these special tiles and definitely wish there were more in the game. Hopefully publisher FoxMind provides that with a future expansion.

Slide Blast wasn’t a game I expected to like as much as I did. Yes the rules are super light and so is the decision making, but that’s OK. It works perfectly as a family game or a filler game on game night. The game is fun, the theme is unique, and it can make a perfect gateway game. In fact, I think Slide Blast is a better gateway game to the tile laying genre than the long reigning king, Carcassonne (which is a pain to explain farm scoring to newbies).

Other than wanting a bit more variety out of the tiles, I don’t have much to complain about with Slide Blast. It’s already made its way to my gaming table quite a few times and I’m keeping this one in my collection.

Hits:
• Easy to learn, highly accessible
• Scales perfectly from 2-6 with minimal downtime
• Looks great at the end of the game

Misses:
• Could use more variety in the slide tiles