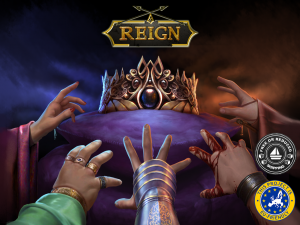 The element of betrayal is a hit or miss for me when it is a part of board game. I like it when it is more subtle and allows for doubt and misdirection rather than directly lying to your face.

The game we are previewing today strikes a nice balanced between those two extremes when it comes to this element. Set in a world in chaos, Reign: The Card Game pits players against each other attempting to win the war of succession and claim the kingdom. Player’s cannot do this alone and must align themselves with great houses to earn their support. You will have to barter and negotiate with other players as you try to earn enough points to win the game and claim the crown. Let’s get into the preview to see if this is a game you would like to pledge your support on Kickstarter.

The Onyx Crown in Kazath remains unclaimed and you see this as an opportunity to seize power. To be crowned the ruler of Kazath, you must gain legitimacy through defeating your opponents in battles or supporting the player who does. Each round will consist of players bidding for the support of respected houses in the region, for without their support you cannot claim the throne. Players will then use military or event cards to determine who has the strongest total force and claim the Onyx Crown card for that round. Earning legitimacy points for that player and any player that supported them. This will continue until a player has at least 9 legitimacy points and has the Onyx Crown card in front of them.

At the start of the game, players will randomly select which of the great houses will be used. All of the respective houses military cards are shuffled together to form the military deck that is placed next to the event card deck. Each player will draw 5 cards from the military deck and 2 from the event deck and the game can begin.

Each round of Reign has four phases:

1. Influence Phase
Players will place as many military cards as they like facedown in front of them to bid for one of the house’s support. The bids are revealed and the player with the highest total force of a certain house, designated by that card’s color and symbol, claims that house card for that round. All the cards are discarded.

2. Plotting Phase
Starting from the first player, players may show support for themselves or another by placing a military or event card from their hand face-up in front of any player that possesses a house card. After this first pass is completed, players may place up to two cards face down in front players with a house card. If the last card they place is in front of another player, they are considered to be backing that house this round. Players can use negotiation to earn player’s support. If a player chooses to not place any cards in this phase, they are able to draw 2 military cards and 1 event card at the end of the round.

3. Combat Phase
Each player with cards in front of them will shuffle the facedown cards and then reveal them. Players will total the force in their army and deal with any event or military card effects. The player with the highest value wins the combat phase, takes the Onyx Crown card, and becomes the new Regent and first player next round. This player earns 3 legitimacy points and 1 point for each player that backed them. Being the Regent will give the player a few special abilities to use next round like being able to place three cards face down in the plotting phase and distributing the spoils in the next phase. However, for each house card that changes ownership during the Influence phase requires the Regent to discard a card from their hand.

4. Regent Phase
Each player draws either 2 military cards or 1 event card into their deck. Then the Regent player draws a number of military cards equal to the number of players in the game. They must give 1 card to any player that backed them in the Plotting Phase, but can distribute the rest of the cards as they deem fit. All military and event cards used during the first three phases are shuffled back into the military deck and the next round begins.

These rounds will continue until one player has claimed the Onyx Crown card for that round and has at least 9 legitimacy points and they will be named ruler of Kazath.

Reign does not try to complicated things in terms of mechanics. All the rules are very clean and easy to understand. The simple mechanics allows the deception and bluffing to take center stage a lot like in The Resistance. From the onset, players realize that they are not able to win the game on their own. Due to the limited number of cards you have in your hand, you will quickly run out of resources if you try to do everything by yourself.

Players will need to offer their support on future turns or using a their major bargaining chip to offer them cards if they are the Regent at the end of the round. Like in most games, no one is bound to these agreements, which creates some of the more entertaining parts of the game. When a player who wins the round doesn’t pay up or the other player decide to not give the support they promised, this allows the rest of the group enjoy the look on the backstabbed player’s face.

I think the game is best enjoyed at the higher player counts. This allows for more people to be negotiated with and players to have to battle over the support of each house that round. This also gives players the chance to be sneaky with their betrayal. Because the facedown cards are shuffled before they are revealed, this gives players the chance to shift blame to someone else or to hide behind accusations voiced by others.

In the lower player counts, this is not as easy to do. The element of backing another player does a nice job keeping people involved with the game throughout. Players always have the chance to earn points, even if they do not earn the crown. This keeps the negotiations going even if trust is lost during the game.

What ends up mattering just as much as the force you are able to muster that round is the event cards and I love what some of them can do. They can affect your own or another player’s army’s force, can skip entire phases, or steal cards from other players. These add in some twist and turns to the game. I think that the game would be rather boring without these events shaking things up. I also like how each house has one unique military unit. These units add some variability to the game depending on which ones you use. I frankly would of liked more of this in the decks to give them more personality than just the flavor text.

Reign: The Card Game is a nice first offering from Garage Games. Any game that uses negotiation as a major mechanic is frankly hit or miss for me. Reign ended up being one of the hits. The game is a quick experience and has simple rules to quickly get players throwing promises around the table, with a dash of betrayal as well.

The event cards add some variability to each game and, depending on when they are played, can quickly affect the remainder of the game. If you are looking for a game that accommodates over 5 players and still brings a fun betrayal game to the table consider giving Reign: The Card Game your support.

If you’d like to become a backer, pledges start at $19 for the full game and stretch goals. Reign: The Card Game is scheduled to be in backers hands in June of 2017 and you have until Tuesday, February 14th to become a backer. Head over today and check it out.