Board Game Review by: :
Jeff Patino

We review the post-apocalyptic board game Raid & Trade, published by Mage Company. In this miniatures game, players control a survivors who must raid locations and trade with other players if they hope to win. 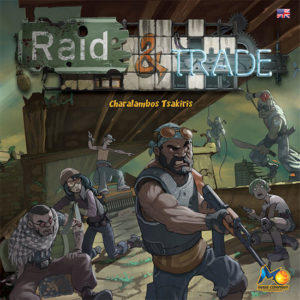 Raid & Trade was published in 2015 by the Mage Company and first-time designers Charalampos Tsakiris and Malte Kuhne. It is a game for 3-5 players that plays in 90 minutes, but a learning game will definitely take longer as players learn the strategies to complete the end-game winning conditions. There is an expansion called “Raid & Trade: War on the Streets” that is planned to be published in 2016.

As stated in the game’s title “Raid & Trade”, this game focuses on raiding and trading, but offers the experience of a post-apocalyptic exploration game with smatterings of combat and set collection thrown in for good measure.

In Raid & Trade, players act as survivors of a third world war and are attempting to win the eye of the Regents of the Golden City. The players do this by attaining favor, crafting items to bolster their skills, and satisfying quests that are exposed as the game progresses. This game is highly interactive as players trade and fight with each other, vie for houses to raid and the Outpost to gain favor, and search for the right combinations of resources.

The highlight of this game is its art. It is done in a style reminiscent of a 1980’s animated TV series. The art definitely jumps off the cards, the player boards, the map and house tiles, and tokens. The art of each character emits their personality and made me feel like I wanted to know more about their backstory. The game comes with a unique plastic miniature for each character and the Outpost. These miniatures are sturdy and highly detailed. They are fit to be painted, if one was to be interested in doing so.

The production quality of the card and cardboard components is top-notch. The cards are linen-finished and appear to be able to hold up well, even with their periodic shuffling. The cardboard is thick and sturdy. The only minor quibble I have with the components are the dials on the player boards. They are a little fiddly to manipulate and will inadvertently change value if jostled. So be aware!

The rulebook is pretty well organized and has a number examples of play. There are a few typos and grammatical errors, but nothing that detract from learning to play the game. The rulebook contains a 4-5 player scenario and some other variants to change up the play of Raid & Trade.

Players begin each round of the game with 15 actions points which are spent throughout the round to perform movement on the map tiles and various actions. The designated starting player chooses 1 card between the 2 drawn Global Events cards for the round. The starting player then takes 1 movement and 1 action in any order they choose. Play continues in a clockwise fashion from player-to-player until all of the players have passed (normally when they have no more action points to spend).

A player can perform a movement in any direction on the map and as far as they desire to traverse just as long they have enough movement points to do so. It costs 1 movement point to move from a map tile to another and also to cross a red-outlined barricade.

On a player’s turn, the player can do one of the following actions:

Other free actions can be performed by the players during their turns like completing Quests, obtaining Incident cards, or playing Incident cards and crafted items for their one-time bonuses.

At the end of a round, players gain 15 action points and the player with the least amount of resources becomes the starting player. Play continues round-to-round until one player accomplishes one of the game’s winning conditions by being able to have and spend 20 action points and:

The play of Raid & Trade is quite epic. The paths to winning the game are not easy to accomplish so the first game of this may take quite a bit longer to finish then the stated 90 minutes. The rules do not account for a “shorter game”, which may have been a better entry point to learn to play the game. As a house rule, I would suggest paring back the winning conditions just to make teaching games short and concise.

I have played this game at both the 3-player and 4-player counts. I can say that I like the game better at 4 players because it feels tighter due to the increased interaction between players (combat and raid-jumping). I also have seen more determined negotiation and trading between players at 4-players as well as making alliances.

I liked that the map is made up of modular tiles and just as long you follow the guidelines laid out in the rulebook, there are numerous ways to build it, even making the map into shapes different than the initial recommended square pattern. When you couple this with using the Wasteland tiles, the variability of starting setups can make every game play differently each and every time.

In Raid & Trade, almost everything that is gained is also expendable, from resources to Favor/Skill points to incident cards and that alone makes this game exude its theme. In this post-apocalyptic world, everyday items and abilities are difficult to obtain and maintain. Each playable character is asymmetric, meaning they play somewhat differently than other characters. Every character can craft their own unique items, but even those items are one-time use following along with the theme.

Another asymmetric feature of each character is their unique combat die. The attack and defense results from each die vary from character-to-character and each die may also trigger a unique reward when rolled. Even though this game is not a dice-chucker, which I normally prefer, the asymmetry of the dice makes up for that and again fits the theme of scarcity that is weaved throughout this game.

I found that it is easy to get side-tracked playing Raid & Trade because of all of the player interaction. A player needs to stay focused at the task at hand, which is satisfying one of the winning conditions. This can be very frustrating at times due to the ebb and flow of gameplay and of course, how the other players affect your progress. At several points in the game, it will be crucial to gain alliances with other players (trading) or selectively combating with them which most likely will break those alliances. As stated in the rulebook, “Achieving victory can be difficult… “. That is an understatement that I can attest to!

Raid & Trade compares favorably with other games in this genre. It is challenging and highly interactive, a competitive game that will appeal to gamers who like the “in your face” play style. If you can endure multiple plays, it is a game that will reward its players the more they repeat playing it. I think that is definitely required in order to be able to learn and apply the best strategies for winning this game.

Hits:
• Easy to learn, but hard to master
• High replay value due to the variable map/tile layout and variants
• Asymmetric player abilities and play style
• Theme supported by the art/game components and game mechanisms

Misses:
• Missing a short-game variant for first-time players
• Winning conditions are difficult and somewhat frustrating to accomplish
• Not for non-confrontational players