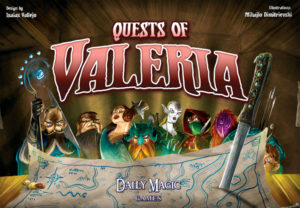 The last time we ventured into the realm of Valeria, we were building villages for the kingdom in our highly rated Villages of Valeria. Well apparently the realm is in some dire straits as they now need guild masters to venture to the glorious Gutrot Tavern to flex their recruiting muscles.

Enter Quests of Valeria, the third game in the Valeria line from Daily Magic Games. Your main goal in Quests of Valeria is to recruit adventures to complete various quests in the Kingdom. Sounds easy enough, right? Well not so fast, because other guild masters will be competing for the same goals.

Quests of Valeria is a resource management and set collection game for 2-5 players that takes about 45 minutes to play. Quest of Valeria plays best with 3-4 players.

In Quests of Valeria, players will be taking turns recruiting adventurers and sending them out on quests. Each completed quest will not only grant the player precious victory points, but also bonus actions that can immediately be taken. After one player completes their 5th quest, then the game ends and the player with the most points wins.

The main component of the game are the various decks of cards. Citizen, Quest, and Guild Masters are the three main decks in the game. All are wonderfully illustrated by Mihajlo Dimitrievski. Not only is his artwork quite stunning, but his iconography works well on the cards, causing no confusion for us as we played and learned the game.

The rulebook in Quests of Valeria contains the usually Daily Magic Games thoroughness, although it still contains the large walls of text that can make it a tad intimidating.

Quests of Valeria is easy to learn, thanks to the handy player aids and its accessible rules. Once the various decks are shuffled and each player has secretly been given a guild master card, you are ready to begin.

Starting with the first player, each player takes a turn that consists of 2 phases:

1. Action Phase: A player must take 2 actions from the following list:

May times hiring a citizen or completing quests will provide bonus actions for the player to immediately take. These are usually of the 4 listed above, but there are also some unique ones as well.

2. End Phase: During the end phase, all citizens in the tavern are slid to the left to fill any holes, and then new citizens are dealt out to the right. Quests spaces are also filled.

Rounds go by in this manner until a player has completed their 5th quest. At this point, the round is finished and players total up their victory points. A player’s guild master will provide bonus points based on competing a specific type of quest. The player with the most points wins.

With that out of the way, I do think Quests of Valeria is a solid card game that can easily stand on its own. My favorite feature of the game has to be how you can chain actions together. Players only get two actions on their turn, but many turns you will be taking a lot more than that. And the interesting thing is that it doesn’t require any engine building to start to chain. Right out of the gates in turn one, players might be taking multiple free actions.

Many times I will study the citizen line, trying to figure out the most optimal route of actions that provide me with the most benefit. Hire this guy, who lets you complete this quest, who lets you draw two cards, possibly letting you quest again. And that’s just one of your two actions.

However if there is one aspect of Quests of Valeria that gives me pause is that I feel like the game could use a bit more depth. When you complete a quest, you have to spend your adventurers, with most purchases coming close to wiping out your guild. The means that there is really no build up in Quests of Valeria.

It’s hire, quest, discard, and repeat. Thankfully the game moves and plays quickly, so the end game will arrive before that gets too repetitive. But it also probably won’t be a game you are going to be eager to play back to back.

Players have to be acutely aware of their resource management skills in the game. With the game ending after a 5th completed quest, players won’t really have time for wasted actions. Hire too many citizens that you don’t need and you’ll be wasting precious turns. Scoring can also be really tight in Quests of Valeria, so you definitely don’t want to waste actions.

Finally, Quest of Valeria can have a decent amount of player interaction in the game. There are some cards that will have you stealing cards from your opponent, or otherwise messing with them. But another way is through the ability to wipe the quest tavern. Many players can start to telegraph their guild master by the quests they reserve. A savvy player will wipe the tavern if it gets heavy with those types of quests.

Or even meaner, if you see a player hiring specific citizen for an obvious quest in the tavern, you can either reserve it ahead of them, or wipe the whole room. I loved this bit of cat and mouse in the game.

Quests of Valeria is a solid and streamlined game that does a good job of holding our attention throughout its entire 45 minute play time. While the game edges close to repetitiveness, I think it does a good job ending before it overstays its welcome.

Quests of Valeria is easy to learn, turns will move by very quickly, and the art is expertly drawn. While the two player game can be a bit too tight for me with scoring, turning it more into a race game, Quests of Valeria can really shine with 3-4 players.

If you are a fan of resource management and set collection games, I think you might enjoy the newest offering in the Valeria line.

If you’d like to pick up a copy of Quests of Valeria, you can get it for about $25.

Final Score: 3.5 Stars – A solid resource management and set collection game that’s easy to learn and ends before it overstays its welcome.

Misses:
• Could us a bit more depth
• 2 Player game turns more into a race 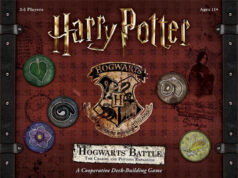