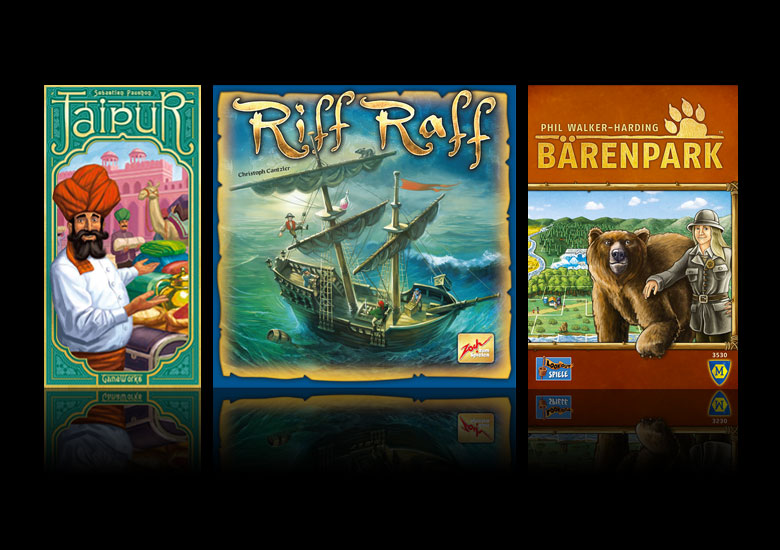 We are back with another installment of Parental Guidance, where I chose games to play with my parents, and my mother chimes in with her thoughts on the games I brought. The goal of this article series is to help you choose new games that you can pull out with your family and other non-gamers. Ideally, these will be something different from the Ticket to Rides and Catan games you’ve played 1,000 times. If you missed the first installment of Parental Guidance, be sure to give it a read as there are some good options in there. As always, I’ll start with a summary of the game, why I chose it, and my mother’s thoughts. On to the games!

Quick Summary:
In Riff Raff, your goal is to try to be the first to load all of your cargo onto the ship. While that may sound easy, it’s anything but. The ship is quite unstable and sways around with a big counterweight on the bottom. The cargo itself is a hodgepodge of misshapen pieces and sizes. Explaining the rules is very simple, play a card (numbered 1-10) and place a piece of cargo on the matching numbered area. If pieces fall off, you can try to catch them, but anything you miss goes back into your pile. First player to load all of their cargo wins.

My Take:
Riff Raff was a bit of an impulse buy for me. I love dexterity games, as they are usually both very accessible and something different from most of my board and card games. Riff Raff in particular stood out to me as I thought my parents would enjoy the theme, because they are avid sailors. I had played it once previously and it got high marks from the group I introduced it to (all non-gamers).

Mom’s Take:
“Fun game and easy to learn how to play. It moved fast and kept my interest. Playing was not as easy as it looked. I like that you have to use the numbered cards to place you wooden pieces as that makes it more challenging than the other balancing games out there. One thing that did frustrate me with this game was when your dad would bump the table and the pieces would fall. I would suggest standing around the table to play this game, rather than sitting!”

Quick Summary:
BarenPark is a tile laying game where players are trying to build a park of bear exhibits. It uses Tetris shaped pieces that are played onto a grid, so players need to be strategic in their placement. The rules are fairly light and learning to play only takes minutes. Take a piece from your reserve and place it on the board. Any symbols you cover up will grant you additional pieces to play. If you fill up every available square on your grid, you earn bonus points. Most points at the end wins.

My Take:
I have really been enjoying BarenPark lately. I like tile laying games in general and even though BarenPark is quite light, it plays quickly and is a fun little game. I also love the sense of accomplishment that comes at the end when you can see the park you created built out in front of you. I chose it for my family knowing my mother’s love of tile laying games and because of the accessible nature of the rules.

Mom’s Take:
“This one didn’t do anything for me. There was a lot of downtime between turns so I would lose interest and play with my phone! I think this would be better with fewer players so there wouldn’t be so long of a wait before I got another turn. Also, from where I was sitting, it was hard to see the far end of the tile selection board.”

Quick Summary:
Jaipur is a 2 player only game where players take on the role of merchants trading in exotic goods: camels, spices, fabrics and other riches. The player’s goal is to trade in sets of cards to gain points. When not trading in sets, players are collecting cards from a shared market. However they have to be careful on which and how many cards to grab, as they don’t want to leave their opponent with more lucrative options. Most victory points wins the round, and claiming two out of three rounds wins the game.

My Take:
I had played Jaipur once before and thought it to be a really good game. I happened to see it on the clearance shelf at my friendly local game store (FLGS) and decided to grab a copy for myself. Jaipur was a last-minute addition to my gaming bag on our trip because it has a small footprint. I hadn’t played a game like that with my mother before, so I had no idea how she would take to it. However it is a 2 player only game, so we had to wait until the rest of the family was off doing something else before we were able to test it out.

Mom’s Take:
“I liked this game the best! It moves fast and was easy to learn, with just enough strategy to make it fun but not so intense. Colorful cards and scoring was simple too with the large numbers on the back of the chips. A nice travel game.“