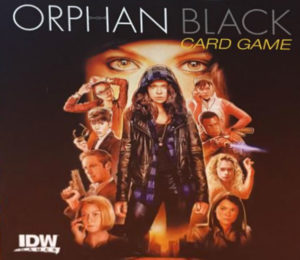 It seems that over the last few years, social deduction has been a fast-growing genre in the board game hobby. Taking a spin from games like Werewolf, publishers have boiled down those experiences into shorter games that give a similar feeling.

Orphan Black: The Card Game is, at its core, a deduction game. But it layers on some card play allowing players to do more than just try to lie to each other. Your actions will clearly speak louder than your words, as players try to influence clones to their faction without being completely obvious.

In Orphan Black, players are assigned a faction and three specific clone targets. They play influence cards to try to move clones to their faction without tipping off everyone to their loyalties. After all 9 clones have been resolved, players score bonus points for their targets and any correct accusations they made. The player with the most points wins.

Orphan Black: The Card Game consists, surprisingly, of a lot of cards. There are full-sized cards to represent the clones, the secret objectives, and the influence cards. There are also mini cards used by each player to accuse other players of belonging to a specific faction. Unfortunately, all of the cards are pretty flimsy. Although they work fine, I worry about cards getting bent and marked up after significant plays, which can be a big problem in a bluffing game.

There are also player boards and a scoreboard that are made of similarly thin material. While these aren’t impressive, they won’t really detract from the gameplay at all.

All of the artwork on the cards appears to be stills from the television show. Most of them are headshots of various characters. I haven’t seen the show, so it didn’t do much for me thematically. In general, I think getting fresh artwork for a game, even based on an existing property, is better than this alternative.

During setup, each of the three faction cards are laid out in the center of the table in a predefined way. The Black faction to the left of the Proletheans and to the right of the Neolutionist faction. This is important as clones start the faction depicted on their card, but influence is played to the left and right sides of the clone card and can push that clone’s allegiance to a neighboring faction.

Players are given a goal card that shows their faction and three targets that they will score additional points if they end the game aligned to their faction.

On your turn, you have the option to play a character card for its ability. Then you must play an influence card face-down on a clone. Each clone also has a special ability you get to resolve after playing your influence. Examples include allowing you to look at other face-down cards or perhaps moving influence from one character to another.

After this ability, if any clone has a total of 6 influence cards played on them, they are resolved. All cards to their left and right are turned face-down and shuffled as to not give away any extra information. If a clone has more influence on one side than the other, they may move factions.

Each clone has a different threshold that must be met to change factions. Each faction has a clone with a threshold of 0, 1, and 2. The difference between the influence cards on the left and the right must be greater than that threshold or the clone will remain with their starting faction.

At the end of your turn you may also play an accusation card if you believe you know which faction another player is working for. You will score extra points for correct accusations and if people guess your faction incorrectly, you also score an additional point.

Once all clones have been resolved, players reveal their goal cards. If 2 players are aligned with the same faction, the points for that faction are halved before scoring continues. Players then start with their factions points and score additional points for successfully influencing their targets and making accusations. The player who has the most points is the winner.

For starters, the first game or two of Orphan Black: The Card Game were pretty rough. For a bluffing game, it has quite a bit in the way of rules and text. This is also one of the game’s strengths, as it allows for some interesting tactical decision. Just be prepared to feel a bit confused out of the gate until you can really see how the mechanics work and take advantage of all the options available to you.

With thousands of games being released every year, Orphan Black differentiates itself from other deduction games. It isn’t a purely “social” game. How you distribute your influence and how you resolve clone abilities add a layer on top of simply trying to hide your faction from other players.

At first glance, it isn’t straightforward on how you can try to get clones to your faction without being completely obvious about your loyalties. However, since you will want some clones to stay with their starting faction, and there are cards that give 0 influence, it is quite a bit more nuanced than it appears.

You may play a card to the left side of a clone who starts in The Black, pushing them more toward the Neolutionists. But, maybe you are just trying to balance the influence out to keep them in the Black. Or maybe that card is a zero influence card and won’t actually push them in that direction.

Of course some clones abilities will allow players to flip face-down cards and your once secret intentions may now be publicly known. You can also, obviously, just play a card in a way that doesn’t help you to throw folks off of your trail.

Once all 9 clones have been resolved, the game ends. You can complete a game of Orphan Black in about 30 minutes with any number of players. I appreciate that the game doesn’t outstay it welcome and scales pretty well at all available player counts. I wouldn’t often play it with 6 players, just because the downtime between turns can be pretty significant.

The end game scoring between factions is often within just a couple of points. As mentioned, it is possible that two players are aligned with the same faction. In that case, the points for that faction are halved before the other points are added. To win the game you are going to have to score additional points from making correct accusations and influencing the specific targets you were given to begin the game.

Although I haven’t seen or read any of the material that the game is based on, I had a good time digging into Orphan Black: The Card Game. Social deduction games often wear out their welcome for me, working themselves into a logic puzzle that can be pretty easily solved.

I enjoy the layers that Orphan Black added to the deduction element. It isn’t enough to just lie to everyone, you still have to accomplish the goal of influencing folks toward your faction. It rewards repeated plays; during the first play or two it wasn’t easy to hide my faction. Once you get a feel for the clone abilities and smaller details, the game really starts to come to life.

If you’d like to pick up a copy of Orphan Black: The Card Game, you can get it for about $20.

Final Score: 3 Stars – A solid social deduction card game that manages to stand out in a crowded genre.

Misses:
• Quality and artwork is uninspiring
• First play or two can be rough to get a grasp of the mechanics 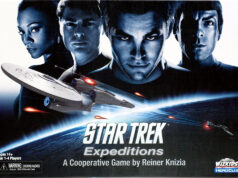