We review New Your Slice, a new family freindly game from Bezier Games. In New York Slice players are dividing up and selection slices from different types of pizza in the hopes of earning the most points. 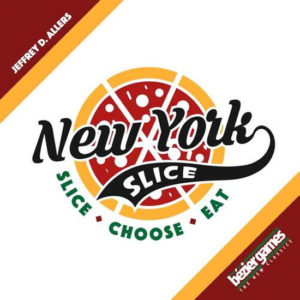 New York has the best pizza in the world (Editors Note: Tahsin clearly misspelled Chicago here). With that out-of-the-way as a universally accepted fact, gamers are left wondering “When will someone make a pizza game that artfully envelops players in the challenges and drama of selecting pieces of delicious pie? I’M WAITING HERE!” Bezier Games made one in the form of New York Slice. Let’s take a bite and see if it’s acceptable, or if gamers should forgeddaboutit.

New York Slice is a set collection game for 2-6 players that plays in 30 min. It plays best with 4 or more players.

It’s not clear who the players’ roles are in New York Slice, but what is clear is that players will be dividing up and selecting slices of pizza from a random pie. Majority scoring occurs for the number of slices each player has acquired, with the number of points matching the number of slices available in the game. Chalkboard tiles grant special abilities for an additional variety of scoring opportunities.

New York Slice is one of the best produced games this reviewer has ever seen. In terms of art, component design, and usability, this production is unrivaled in recent memory for such a light game. The score pad looks like an order ticket from a pizza shop. The rules mimic the graphic design of a pizza parlor menu. And rounding out the production, the slices of pizza tiles are photorealistic depictions of pizza. When laid out in a pizza pie shape, it’s a huge amount of fun to just look at the pizza and think of the flavors. Huge props to Bezier Games for the amazing artistic choices here.

Shuffling the pizza slice tiles and chalkboard tiles into facedown stacks is the core setup. Once this is done, the start player forms a circular pizza from 11 slices to begin a round.

On each slice are a variety of toppings and a number. The number indicates the number of slices available in that type, as well as the number of points the majority holder will receive from those slices at game end. The first player then divides the pizza up into a number of sections equal to the number of players. A chalkboard tile is added to one of the sections. Then, going clockwise, each player chooses and takes a section (including the chalkboard tile), with the slicing player getting the last, unchosen portion.

Once a section is chosen, that player chooses whether to add each slice to their ongoing stacks of slices, or if the slice contains pepperoni, to eat the slice. Players will earn a point for each pepperoni they eat during the game. It’s often a good idea to eat slices of types that you’re not competing for.

The chalkboard tiles will also grant players ongoing special powers or new scoring opportunities such as gaining points for anchovies (normally these are negative points at the end). Once all the facedown stacks of pizza slices are depleted, players count the scores.

This is a very light game. The theme hints at it, and as such, gamers expecting something in the weight to rival the amazing production quality won’t find it. However, the heavy theme and excellence in components are not wasted when considering that this is one of the best games for introducing true newbies to board gaming.

The essence of play, being so simple, is also where the short playing time comes from. NY Slice should be considered a filler, but it’s also got enough meat for multiple plays and intense competition. There is hardly a round that goes by without careful analysis of the other players slices and what paths to victory are still available. An even more difficult analysis occurs when trying to remember the amount of pepperoni each player has eaten. Amongst light games, this one does hold its own with more seasoned gamers.

One aspect where any game with majority scoring tends to fail is with two players. New York Slice does not differ here. It’s at best, an OK game with two players. With three players, it changes dramatically and the nuances of the competition can certainly be felt. With more and more players, the play gets even better. It’s the perfect game for 6 players looking for an opener to game night where two groups of three might split to play different games.

The real caveat to this game is that there’s really no adaptability to the mechanisms. There is very little in the way of making New York Slice any heavier than a light game and so some intense gamers will really frown after one play. This is an opportunity that could be explored with an expansion. If it gets the same treatment as the base game, (cardboard bread sticks anyone?) then it should fit right in.

If you’d like to pick up a copy of New York Slice, you can get it for about $25.

Misses:
• Not so great with two players