We review Nation: The Dice Game. If you were a fan of the Nations board game, or just dice rolling games in general, then you probably have heard of Nations: The Dice Game. We break down the game and see if it's worth your gaming dollars. 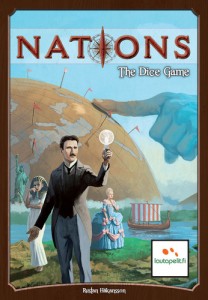 I love the Nations board game. I’m a huge fan of civ building games in general, but Nations has just the right amount of variety and uniqueness that propel it to our gaming table often. Heck, it even won our Game of the Year award for our 2013 Board Game Awards.

So when Nations: The Dice Game debuted at Essen 2014, you better believe I wanted to play it. Unfortunately, the game was delayed from its mass distribution until spring of this year. Finally though, I was able to get my hands on a copy. Since then I’ve able to get it to my gaming table quite a few times. Does it hold up to the greatness of its big brother? Let’s find out!

Nations: The Dice Game is played over 4 ages (rounds) in which players are trying to build up the best civilization possible. Each round, players will be using the results of their dice to buy buildings and military units, conquer territories, hire advisors, and also build wonders. Each new tile acquired will give the player access to better dice, tokens or maybe just victory points. At the end of each age, players must also avoid famine, win wars, and maybe spread their culture a little. After 4 ages of play, the player with the most victory points wins.

The game components in Nations: The Dice Game are solid, if unremarkable. The game comes with a pile of custom dice, all which use game specific iconography. There are only a handful of icons in the game and they are fairly intuitive, so learning should be simple.

There are 60 progress tiles (15 for each age) and 12 event tiles also included. These will be the player’s main focus during the game. Each progress tile is illustrated to be both thematic and also contain information useful to the game.

If I had one complaint it would be able the player boards. The card stock they are printed on is somewhat flimsy and they also don’t have a “B side” like they do in the original Nations game. I was disappointed to discover that there is no difference between player civilizations other than thematic.

Game play in Nations: The Dice Game is very easy to pick-up. Each player starts the game with a civilization board, 5 white dice, and two tokens (money and a reroll). Turn order is decided randomly for the first age by dealing out the player cards. Before your first turn in any age, you roll all of your dice.

On your turn you can do one of three actions:

Buy a tile:
The tiles in the progress market all cost either gold or swords. Depending on the row they are in, they will cost 1, 2, or 3 of them. When you buy a military unit or building, they are placed in one of your five building/military spaces. Since you can only ever have 5 tiles at a time (including start ones), this may cause you to forfeit dice or tokens, but it usually comes with a much better benefit.

Build a Wonder:
Wonders are the only tiles that don’t come pre-built. Once bought, a wonder goes into your building area. You must spend stone from your dice or tokens to build it. Once finished it is put in your completed area (gaining its benefit)

Re-Roll:
You can use one of your re-roll tokens (if you have any left) to re-roll any or all of your unused dice.

After a player completes one of these actions, the next player in turn order takes their turn. Play continues in this manner until all players have passed for the round.

At the end of the round, players produce and score books, may gain victory points from the famine and war if they have the applicable dice left, and the new turn order is set based on how many swords each player has.

At the start of a new age, the progress tile market refills, a new event tile is drawn, and play continues. At the end of the 4th age, the player with the most victory points wins.

Because of my love of Nations: The Board Game, to say I had high-exceptions would be an understatement. This was one of my must-play games from 2014.

Unfortunately, Nations: The Dice Game was not the home run I was hoping it would be. To put it bluntly, there really just isn’t a whole lot here. I feel like they wanted to simplify things to appeal to the dice game fan, but I feel like they went way, way too far.

For starters, each age kind of feels the same. Yeah, the buildings will have 2 dice on them as you move up in ages. But for the most part, you are just picking tiles up that all have minor differences. I felt like I was doing the same thing over and over. I never really felt like I was accomplishing anything.

Usually civ games are all about engine building. While Nations: The Dice Game does have some of that, it all feels a little bit lack luster. You will get tiles that give you more tokens and some that give you more or better dice. But the game never really goes anywhere after that.

The fourth round of the game is where that comes to a head. Over all it ends up being pretty anti-climactic. The only real thing to do is buy tiles with VPs on them, but that’s only if you get the right dice rolls. If feels like the game was a slow build up…to nothing. Half of the time there are at least 4-5 unbought tiles in the market because people couldn’t afford them.

Part of that problem probably stems from the progress tiles themselves. There really isn’t a ton of variety here. They all provide either 1 or 2 dice, or 1 or 2 tokens. Combine those details with the fact that the purchase price is completely random can be mildly frustrating. For example, there is literally no difference from the Aqueduct or the Confucian Academy. Both provide the player with 1 blue die and cost gold. However where they are dealt could determine if they cost 1-3 gold.

Nations: The Dice Game is also a really accessible game. As you can see from the above rules, the game itself is super easy to learn. The progress tokens are laid out fantastically to make them easy to understand. Cost on the left, bonus on the bottom, victory points on the right. This makes teaching the game super simple.

With that level of accessibility you seem to sacrifice variety in my opinion. In addition to the aforementioned issue with the progress tiles, I hated how there was now difference between the civilizations. Building Rome vs Egypt has literally no difference other than color. This felt like a huge miss to me.

Finally, one thing I think the game did do right was that there are a few paths to victory. You can try and focus on VP producing buildings or maybe you what to focus on books and earn a steady stream of VPs each round. Or you can put your focus on the event tiles and try and get your food and swords each round. In that regard, Nations: The Dice Game did a good job, although I do wish there was a bit more variety in the event tiles.

I really wanted to like Nations: The Dice Game. This was a game I grabbed as soon as it was available. However, the game play just didn’t hold up for me. The rounds felt too similar, the tiles and civilizations lacked variety, and the end-game left me wanting more.

While the game is by no means a bad one, I think there are already better games out there doing the same thing Nations: The Dice Game is trying to do (Roll for the Galaxy comes to mind). Perhaps I’m being overly harsh because I had high expectations. But I think that this game could have been so much more and in their eagerness to streamline the game play, they left too much on the cutting room floor.

Nations: The Dice Game is a game I’d play if someone offered, but not something I’d seek out (or even feel the need to own). I think it straddles the line of being slightly too long for a filler game, yet not complex enough for a light weight game. While its mechanics felt solid and it had some unique ideas, overall if left me just wanting more. Perhaps an expansion down the road could cause me to revisit this one. Right now it more feels like a solid foundation for a game that’s not quite there yet.

If you’d like to get a copy of Nations: The Dice Game, you can pick it up for about $40.

Final Score: 2.5 Stars – Some decent mechanics and a nice throw back to the Nations Board Game, but ultimately lacks variety and complexity to give it staying power.

Hits:
• Easy to learn and teach
• Quick playing time
• A solid foundation for its mechanics

Misses:
• Lacks variety in the tiles
• No difference between civilizations
• Anti-climactic end round
• Ages feel too similar