We review the new collectible card game simulator Millennium Blades, from Level 99 Games. In this card game, players will be playing the fictional CCG Millennium Blades as they build their deck and try to win tournaments. 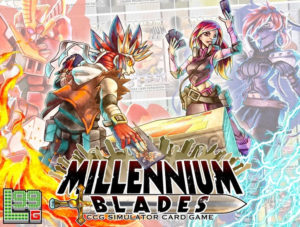 I spent a great deal of time during my high school days playing Magic: The Gathering. If you’ve every been to a game store on a Friday night, you’ve probably seen some Magic games in action. While I ended up selling off all my cards when I stopped playing in college (something I really regret doing), I do occasionally jump into the Magic iOS app for a quick fix.

But one of my favorite parts about playing Magic: The Gathering was acquiring new cards to build out my various decks. Who doesn’t enjoy opening a booster pack and seeing what excitement awaits you. While the booster pack model wasn’t good for my wallet, opening those packs was definitely a ton of fun. Today, we are going to take look at Millennium Blades, a new card game from the minds over at Level 99 Games. Millennium Blades is a game about collectible card games (CCGs) and the people who play them. Does it really recreate the excitement of playing a CCG? Time to find out.

In the actual game you will building decks and collections, “buying” random boosters packs to acquire new cards, and competing in tournaments for prizes and victory points. Each player starts the game with a starter deck and, during the course of the game, will be buying and selling cards in the hopes of turning their deck into a tournament winner.

If you’ve ever played a Level 99 Games product, then you know they like to go bananas with their components. And Millennium Blades gets that same, wonderful, Level 99 treatment. Included in the game are over 600 cards! These are broken up into the Millennium Blades core set, starter decks, 11 expansion sets, premium sets, promo sets, etc… Suffice to say, there is PLENTY here to keep you entertained.

Each card also has an illustration, done in the usual Level 99 art style, set, type, element, power, and even fake rarity. Overall, they did a great job in making this game feel like a real CCG. My favorite part is that the back of each card shows a booster pack graphic and cost. So when cards are face down, you feel like you’re buying a booster.

The rulebook is very clear and is easy to learn the game from. It walks you through the different phases of the game and even has variant rules at the end of the book. Other than the massive amount of cards, each player also gets a dual sided player mat to help them during each phase of the game.

The game of Millennium Blades isn’t overly complicated, but it’s still a heavy game. I’m going to give you a brief overview of how the game is played, but you can download a PDF of the rules here if you want the full information.

To begin the game, you need to set up the store deck. You take the core set and shuffle it with 5 expansion sets, 4 premium sets and 3 master sets. This will create a massive pile to act as the game’s store. Each player then gets a starter deck and player mat.

Millennium Blades is played over a number of rounds, each of which will alternate between a tournament round and deck building round.

Tournaments in Millennium Blades are fairly easy. Each player will be playing 6 cards from their 8 card deck. Players also get access to a deck box and two accessories that will grant them special abilities to use during the tournament. Each round, players take turns playing a card into their tableau, possibly activating a power on that card. The goal is to gain ranking points. Some cards will score immediately, others will start a clash, where you fight other players, while others won’t score until the end of the tournament. After everyone has played their six cards, players total up their ranking points. Players will earn victory points based on where they placed in the tournament.

There will be 3 tournaments played during a game of Millennium Blades. Between each tournament, there is a deck building phase. This is a timed phase split into three parts.

Players start with 30 Millennium Dollars and 6 free cards from the store. The money will be used to buy booster packs from the store. If they get a card they don’t like, they can sell it for cash equal to its star power. Players can also discard handfuls of cards to draw a promo card. The first part of the deck building phase is 7 minutes long, followed by a second phase that’s 7 minutes long, and then followed by a third phase that’s 6 minutes long. However in this 3rd phase, players’ can’t sell cards anymore.

And that’s basically it. The player with the most victory points after 3 tournaments is the winner.

Millennium Blades is a game I remember being on Kickstarter and not paying too much attention too. I think that was because I originally though it was just another CCG/LCG, which didn’t really interest me. Well boy, was I wrong. While Millennium Blades is a CCG simulator, it’s really more of a deck building and economic game. And in that regard, I freakin’ love it.

My absolute favorite part of Millennium Blades is the deck building portion. While the tournaments work and are fun, that’s not really what sucks me into the game. Level 99 Games absolutely captured the feel of being a CCG player with their deck building phase. I’m drawn back to my younger days when I’d dig to the bottom of a case of booster packs to try to get better cards (don’t ask me to explain the logic).

The fact that you are buying unknown cards is a great touch and any CCG player will feel right at home. Funny enough, one of the people I played with had never played a CCG and she didn’t understand why she was paying for cards without knowing what they were. It was a crash course in being a CCG player, that’s for sure. But that’s part of the charm of Millennium Blades, the META nature of it. It knows it’s audience and the game will definitely appeal to them.

Millennium Blades even has a lot of throwback to geeky and gamer culture. There is an expansion set in the game called “Lightning Bug” that features cards such as Jamie Kobb or Capt’n Tightpants. There is another set called Super Plumber Brothers (you can guess what this set might contain). It’s these nice touches that help to make Millennium Blades such an enjoyable game.

Moving on, I was at first worried about the timed nature of the deck building phase, but in practice it was fine. 20 minutes to draft and build a deck really isn’t an issue unless you have severe analysis paralysis. It actually works well to help keep the game moving. The rulebook even says that you can have a grace period if you are finishing up your deck when the timer expires.

For player scaling, I think 3-4 players is the sweet spot for Millennium Blades. With 5 players, things can get a big chaotic in the market and during tournaments. With 2 players, the game actually has a variant and few rules are changed. It’s not bad, but definitely not my favorite way to play.

My only real gripe with Millennium Blades is the setup and tear down. You have a massive deck of cards to shuffle at the start of the game, and also to separate at the end. Expect to spend at least 10 minutes putting the game away. While this does give Millennium Blades a ton of replay value, it also can be a bit of a chore. I almost wish Level 99 would have just made some stock sets that we can choose to play with.

Millennium Blades is fantastic. Even with it’s decently high complexity and play time, I still find my self wanting to get this game onto the table again and again. I don’t usually gravitate towards games with this long of a play time, but Millennium Blades really does it for me.

While CCG fans will definitely enjoy the META nature of the game more than a casual player, I do think that Millennium Blades can appeal to just about anyone. The deck building phase is a blast, and the tournament phase is benign enough to not scare away a more casual players. That being said, Millennium Blades does have a decent learning curve, so probably aren’t going to be pulling it out with your non-gamer friends.

Once you get past the learning curve, and if you can deal with the long cleanup time, Millennium Blades will reward you with some incredibly fun and innovative game play.

If you’d like to get a copy of Millennium Blades, you can get it for about $60.

Final Score: 4.5 Stars – A unique and highly entertaining game that fully captures the spirit of being a CCG player.