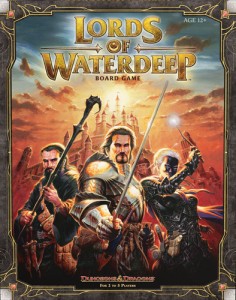 Wizards of the Coast (WOTC), the current publsihers of the popular RPG Dungeons & Dragons is not really known for their boardgames. Not counting the old Avalon Hill titles, still have had a few decent ones come out in the recent years. The Castle Ravenloft

series comes to mind and so does The Conquest of Naraeth. However, if you were to think of good Eurogames, WOTC  probaly would not be the first publisher you’d look to…or even second.

However, WOTC thrown their hats into the eurogame area with their new offer, Lords of Waterdeep. This new worker placement game has players taking on the role of one of the Lords of Waterdeep in a “battle” for supremacy of the city. While some may argue that the theme is completely tacked on, I say who cares. Most people don’t play a eurogame for the theme anyway.

In Lords of Waterdeep, each player takes on the role of one of the secret powers vying for control of the Forgotten Realms town of Waterdeep. During the game, players will send out their agents to do their bidding each turn. These agents will accomplish tasks such as constructing buildings, recruiting adventurers, collecting quests and playing intrigue cards. The main way to score victory points in Lords of Waterdeep is by completing quests. Quests are usually scored by spending a number of adventurers (Fighters, Rogues, Clerics and Wizards) and possibly some gold too. At the end of the 8th round of play, each player reveals their secret lord card and earn bonus VPs based on how many of a specific quests types they were able to complete. The player with the most victory points is the winner and new Lords of Waterdeep.

In general I don’t have high expectations for the components in a eurogame. Many times they are more functional then visually pleasing. Lords of Waterdeep partially falls into this trap as well. I say partially because some parts are really well done. The box, while not the most soundly constructed, is made to resemble an old DnD module. That part is really neat. The game board looks like a map of the city of Waterdeep and works really way in game play. Even all the cards are well illustrated and have thematic quotes on them.

Where Lords of Waterdeep falls flat is with the adventurer cubes. WOTC chose to use colored cubes to represent the fighters, wizards, rogues and clerics. Why they went this route is beyond me when the rest of the game is so well done. It doesn’t fit the theme and by the end of the game you will say you are cashing in 4 orange cubes instead of 4 fighters. I’m planning on ditching the cubes for a more custom solution someday, but it’s no wonder that Lords of Waterdeep has been labeled a “cube pusher” game.

Once the game board is setup, each player is secretly dealt a lord card. This card denotes how you will score extra victory points at the end of the game. Usually this is in the form of complete specific quests. For example, one lord will give you 4 bonus points for every Arcane or Skullduggery quest you complete. After each player has their lord card, they then draw two intrigue cards, two quest cards and collect 4 gold. One player is chosen to by the 1st player and each other player gain additional gold pieces to compensate for going later that round.

On a players turn they can do up to two things:

1. Assign an Agent: Players place one of their agents onto any free space on the game board. Each space can only hold one agent so its first come, first served. After placing their agent, players immediately take the action of the space. This will usually be recruiting adventurers, drawing quest cards, constructing buildings or playing intrigue cards.

2. Complete a Quest: After a player has placed an agent, they may, optionally, complete a quest. If they have all the required items, they simply return those to the supply and place the completed quest in their score pile and gain the appropriate rewards (VPs, money, adventurers or other bonuses).

Play then passes to the next player. The round continues in this fashion until all players have placed all of their agents. At this point, any player who had an agent at Waterdeep Harbor (the space that lets you play intrigue cards) may reassign their agent to any free space. At the start of the next round player collect all their agents back and the round begins anew.

After the 8th and final round the game is over. Players collect bonus victory points based on their specific lord card. The player with the most victory points is declared the winner.

Lords of Waterdeep is an easy play. I say that meaning that the game is incredibly easy to learn and just makes sense. Some worker placement games can get incredibly complex (I’m looking at you T’zolkin), but not so with Lords of Waterdeep. In fact, it has quickly replaced Stone Age as my go-to “gateway” worker placement game. The rules can be explained in a matter of minutes and even new players should understand what needs to be done after a round.

While the game is easy to learn, winning can be anything but. Lords of Waterdeep requires planning, smart action placement and sometimes a bit of luck. During the game, buildings will be constructed that will almost always give you a benefit over using the default action spaces. However this is a double edge sword as any building you don’t control will provide a bonus to the player that built it. This causes for some hard decisions in the game as players must decide if they want to gain the bonus adventurers knowing it will also provide some to their opponent.

Lords of Waterdeep also has a good amount of player interaction. In addition to the usual method of taking someone’s space their were eying, player interaction is mainly achieved through the use of the game’s many intrigue cards. These cards are mainly action cards that serve to either help a player or hinder their opponents. One particularly annoying type of intrigue card is the mandatory quest card. When given to your opponent, these quests must be completed before any other quest by that player. Most have a very small reward and serve to waste time for the player stuck with it.

I actually really enjoy the theme in Lords of Waterdeep, even if it is fairly pasted on. I think had the game not gone the cube route as mentioned above, that would have gone a long way toward helping tie the theme to the game. But it is what it is. Even with its pasted on theme, I’m still really enjoying this game. There is a lot of variety in both the quest, buildings and the intrigue cards. Players will never get through even half of the possible buildings in the game and it will take several play for them to see all the quest and intrigue cards. This helps to ensure a lot of replay value in the game. Which is a good thing because with its quick play time and easy to learn rules, this game has been making its way to my tabletop often.

Finally, Lords of Waterdeep scales surprisingly well. While it plays best with 3-4 players, I have no issues playing it with 2 or 5 players. No customization is required to make the game work well with only two and I’ve found the two player game to be just as enjoyable. Not every game can make that boast, so kudos to Lords of Watedeep for making a game that scales well.

If you haven’t figured it out yet, I really like this game. The components are high quality, the game plays smoothly and is very accessible. Don’t let the theme turn you off, you don’t have to be a Dungeons and Dragons fan to enjoy Lords of Waterdeep.

Speaking of the components, I’d be remiss if I didn’t mention the game box. While the game box looks great and is very stylish, it is not very sturdy. They tried something unique with this box, but it does not hold up well to travel or even light abuse. I found the corners splitting already and have long since moved the contents to the expansion box.

The game plays in around 45 minutes to 1 hour which seems about right. If anything, it’s a tad on the short side. However, that could just be because if you are not in the lead, you are always hoping for just 1 more round to collect some extra VP. Games are usually pretty tight and rarely do we have a run away leader.

While the game calls itself Lords of Waterdeep

and implies a deep D&D (specifically forgotten realms) tie-in, the theme is very loose. If you are looking for a great Forgotten Realms romp, then look elsewhere. This is a eurogame at its heart and the theme is really only skin deep. However, if you are a looking for a new eurogame to try, I’d highly recommend this one. Lords of Waterdeep

does a lot of things right and it will be a game that comes of the shelf more often than not.

If you are interested in getting a copy for yourself, it’s about $38

Final Score: 4.5 Stars – A great worker placement eurogame. Light on the theme, but heavy on the fun.

Misses:
• The lord cards could use more variety, most felt the same.
• Theme feels tacked on.