We review the kingdom building game Kings of Artifice. Players must build their kingdom in 3D using a variety of different units. Game board space will be tight as players rush to grab limited bits of real estate. 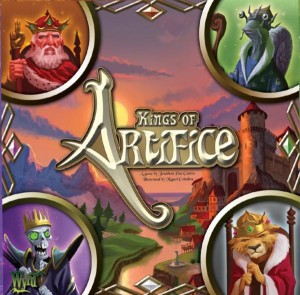 Explore. Build. Conquer. Rule. Those are the words to live by in the new kingdom building game, Kings of Artifice. Players take on the role of kings, each trying to found a new kingdom in an ever-crowding piece of land.  Throughout the game, players will be summoning new units and constructing different walls and structures. Does Kings of Artifice build up to an exciting game, or does it deserve the wrecking ball? Read on to find out!

In Kings of Artifice, each player takes on the role of the leader of one of 4 different (in theme only) kingdoms. Players start with a king unit, literally fresh off the boat in this new land. They must use him to explore, build and summon other units into the game. Players will be able to work with a variety of different units in the game, each of which can both build different structures and also give players another way to earn victory points. At the end of the game, the player with the most victory points will be the winner. This will be based on what a player built during the game, how they positioned their units and also from 2 special victory point cards drawn each game.

Kings of Artifice has both good and bad things going on with its components. First, I really like the artwork. It’s a little cartoony, but I found the drawings to be enjoyable. I think it works well with the feel of the game and is also family friendly, even the undead.

The game comes with 200 wooden blocks, which probably goes into explaining its hefty price tag. These blocks are used to both build your kingdom in 3 dimensions and also act as your units (once stickered).

The stickers are also where my main gripe with the components comes from. When you get the game, each faction’s units will have to be stickered onto one of the wooden blocks. As someone who is very OCD with their game components, I found it very hard to get these on straight. This led to a lot of frustration when putting the game together. If you are someone like me that is very particular with your game components, then be forewarned.

Other than that, the game comes with a couple decks of cards, some very well laid out player aids and a few different tokens. Altogether, you get a good amount of bits and boards for your gaming dollar.

Each player chooses one of the four factions: undead, lions, humans, or slug people. As mentioned earlier, these factions are different in name/theme only. They all work the same. Each player places their king in a boat in one of the 4 quadrants of the board. One player is chosen to go first and rounds proceed in a clockwise manner.

On a turn, a player has 5 action points they can spend. Players may spend actions points to do any of the following:

Move a character: Each character has a movement value that determines how many spaces they can move when activated. Up to two characters can share a single space.
Summon a Character: The king can summon a character to an adjacent space.
Build a structure: Each character can build a different structure and some require two characters to build. Once built, structures will provide both victory points and sometimes special abilities.
Move your ship: You can move it to a different quadrant of the board.
Cast a spell: Players get 1 mana token they can use each round. A player must also have summoned his warlock to the board. There will be two spell cards dealt from a deck of 10 possible options each game. Those two spells are the only ones available for all players to use.
Use a special ability: Some characters have special abilities, as noted below.

A player has 7 different characters they can bring to the board during the game. Each unit can build the basic wall structure and also a special structure:
King: Summons other units to the battlefield and can build the palace structure.
Villager: Can build 2 walls a turn and can also build a house.
Artisan: Must be paired with other units to build some advanced structures. Can build a fountain.
Warlock: Allows a player to cast spells. Can build a tower.
Thief: Can steal an action point from another player, but has no special building.
Knight: Can attack and kill another unit. The knight can build a battlement.
Horse: Doesn’t build, but can move without spending an action point. The horse moves 4 squares, can jump a wall and can carry another unit.

In the crowning round, players have 5 action points to use where they can reposition their units. Each unit will give a player victory points if it can end the game next to its special structure. As the game is winding down, players should be planning ahead for this and start moving pieces into position. Players do gain action points as they construct buildings during the game, but usually it’s a tight race up to this point.  Finally, each game will have two scoring cards to provide additional victory points at the end of the game. The player with the most victory points is the winner.

I enjoy empire and city building games. Perhaps it’s the Lego builder in me, but I just love constructing things. That is probably one of the first things that drew me to Kings of Artifice. During the game, I enjoyed using the blocks to create the different buildings.

While I did enjoy using the blocks to build during the game, the board does start to get a little messy as the game progresses. Eventually blocks will slip if you hit them with your hand and you’ll have to straighten things up. I’m guessing it would have cost a lot more, but it would have been neat to have the blocks replaced with actual structures once built. A palace that looked more like a palace instead of 9 blocks stacked together would have been way cooler. That said I’m at least happy they used blocks instead of just cardboard tokens. Seeing the game come together in 3d is definitely cool.

And watching the game come together is probably one of my favorite things about Kings of Artifice. Every player starts out in their little corner of the board, but eventually the game will turn into a giant land grab. As walls are built and real estate becomes more and more scarce, kingdoms will start to butt up against each other. This can make for some interesting experiences.

And when players finally do start butting heads with each other, it has the potential to get nasty. While Kings of Artifice is primarily a building game and not a war game, each player does have 2 units to cause some trouble. The thief is more annoying than deadly, as losing a precious action point can be felt immediately. The knight is a straight forward unit. When he attacks, he kills another player’s unit (except the king), which then must be resummoned to be used again, wasting another player’s action points. In addition to that, a player gains a victory point for killing a unit. This will definitely throw a monkey wrench into players well laid plans and provide a strategy for the more warmongering players.

For those that don’t like the sound of warring conflict in a eurostyle builder game, then rejoice for they have built some nice balances into the game. First, the artisan can build the very expensive well structure. If your unit gets killed, instead of being taken off the board, they magically reappear next to the well. When that happens, the cost of the well can almost pay for itself. As for the thief, he can only steal one specific action point from a player, so you don’t have to worry about your opponents ganging up on your and wasting your whole turn.

Kings of Artifice is a fun, abstract builder, however at times the game can get bogged down with some fiddly rules. The included player aids are a fantastic addition as we found ourselves referencing them often in our early games. Each unit has its own special abilities, buildings they can construct, movement points, etc. There is a lot to remember, almost too much. I wish these would have been a bit more streamlined. After a few game plays, things start becoming more familiar, but the early games will tend to take longer.

Finally, I do wish there were some variation between the different races, other than just cosmetic. I’m always a fan of unique powers, and having all four races play exactly the same is a bit of a disappointment.

That all being said Kings of Artifice does have a good amount of replay value. Since you only use 2 spell cards and 2 scoring cards out of a possibility of 10 each, then every game should play somewhat differently. I also enjoy the diversity of the spell cards and how they change the way the game is played. I find myself trying to figure out the best way to utilize each one during the game.

Kings of Artifice is a unique kingdom building game that will appeal to players looking for something different. The different units in the game can give gamers a lot of options for what to do on their turn. However the complexity of these units will probably be a bit much for people outside the gaming realm. Kings of Artifice does pack good amount of replay value though. If you can get past some of the fiddly rules and component annoyances, then you have a good game that should not be like others in your collection. For fans of abstract builder games, this one is worth a look.

Final Score: 3.5 Stars – A fun kingdom building game with some unique rules. Feels a little overly complex at times though for what it is. 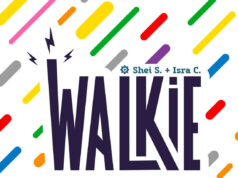 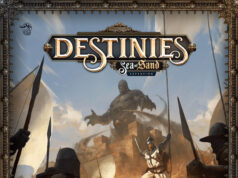