We review Incorporated, an auction and area control game for 2-4 players. In Incorporated, players are trying to run the best corporation, all while managing their assets and position around the world. 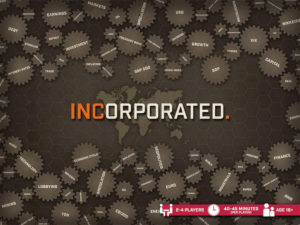 We’re in the era of massive, global corporations that control several aspects of how we live our lives and what our culture means. Just as it is exciting and fun to play a game of RISK imagining we’re commanding massive armies traipsing across the globe, it can be equally satisfying to manage an intercontinental corporation that spans the realms of politics and cutthroat capitalism. A new designer, Can Adatepe, has found a rarely implemented niche theme and self-published a game for those who would dream of sitting in a board room instead of a cubicle.

Incorporated is an auction and area control game for 2 – 4 players that takes 45 minutes per player. It plays best with 4 players.

Incorporated allows players to feel the pressures of international competition amongst global corporations for different industries. By taking control of industries in various parts of the world, players earn money and manipulate financial and political stability. Over four rounds, the player at the end with the most money wins.

For a self-published game, the immediate reaction might be to assume the components are subpar. This is far from reality. The included board, cubes and meeples (translucent plastic), cards, and stock tiles (very thick) are all of very good quality. The art and design of the components is exceptionally well done and the overall impression is that the game could easily come from a more established game company in terms of production quality and design.

The one niggling complaint here is the choice of gloss finish for the main board and cards. Besides making it difficult to photograph, any direct light source reflects brightly off the finish and becomes annoying. A matte finish would have worked much better here.

During a round of Incorporated, players aim to take control of various industries in major and minor countries, with the aim of collecting as much money as possible when those industries are profitable. The beginning of each round includes a setup phase where some adjustments occur (Global Growth, Interest Rates, Political Track) and then “Payoff” cards are drawn to see which of the five industries (Tech, Finance, Heavy, Mining, Energy) will be profitable and to what degree.

The first major phase has players purchasing stock tiles from the various major markets. This proceeds as an auction, however at the end of the auction, any player who already owned stock of that market may now sell it for the end price of the auction. If another player also wants to sell, a downward auction occurs to see who is willing to sell at the lower price.

Once shares have been purchased or sold, the second phase opens allowing players to place Asset cubes on the board in the locations of their stock tiles. For example, a player who owns two stock tiles in the Eurozone places two cubes in the Eurozone market region. Using attack and movement actions on their turn, players take turns moving asset cubes into various industry spaces (hopefully the ones which are profitable for the turn) as well as moving assets across the board like armies to take over industries in other minor countries.

The final major phase of Incorporated is called Lobbying, but it functions more like a catch-all for manipulation of various game mechanisms. Players can adjust Interest Rates, Global Growth, or even gain double normal income for Research and Development of a particular industry. Being able to modify the profitability of certain industries during this phase (by adding or removing Payoff cards) is also exceptionally powerful.

The one mechanism that is most highlighted during this phase is the ability to make “Power Plays” in various countries. This black-ops style action allows players to flip the allegiance of countries (from NATO to China or vice versa). This has the effect of cutting off movement options for Asset cubes when they move across the board as well as potentially sending stocks and assets back to the supply. A single die roll can decide the success or failure of this action.

The last phase has players collecting payouts for their Assets and determining if a crisis happens. This would have the effect of increasing Interest rates and dropping Global Growth. This means that buying new stocks is harder and Industries pay off less.

After four rounds of the above, players count their money and get additional money for being a market leader in an industry and money for controlling Asset cube spaces.

As players venture into their roles as titans of industries, a big promise is made. The game sets the stage for an epic clash of corporations across continents with dramatic turns and intrigue. However, as is noticed quickly, it’s not all what it’s meant to be.

One of the first mechanisms that present a challenge for players is the auction for stocks in the major countries. This fairly standard affair takes a turn at the end price. Since players can also sell at the final price, the purchasing player needs to be acutely aware not to drive the price up too high.

The problem comes in also in the fact that no one can sell a share back to the bank unless someone starts an auction for a share. So if a player is only interested in selling, they would start an auction with the intent of losing the auction just so they can capitalize on the sale price. However, if no one is interested in bidding, then that player is stuck with purchasing an additional share.

This is an extremely engaging moment of brinkmanship, but it also punishes and limits players trying to do something fairly normal. The engagement of the sale really only comes into play when more than two players own shares. Since the name of the game is trying to not enter destructive competition, players are more likely to abandon markets when they feel they’re in a losing position. What usually happens is that certain players dominate specific markets throughout the game, whether they’re profitable or not.

Another immediate mechanism of confusion is the ability to move cubes throughout the world to occupy territories. This is especially interesting, but as player options become more and more limited throughout the game, the engagement starts to drop.

It’s interesting when there are many open spots for competition at the beginning of the game, but once players start solidifying their positions in markets, the game stagnates because shares are not sold (out of defensive purposes) and competition occurs less. This is much more noticeable with lower player counts. In four player games, there is a lot of choice in various markets as to which opponents to attack and so that engagement lasts longer.

One of the most engaging parts of the game, the Lobbying phase, is also questionable. With the exception of R&D, all the actions in this phase seem very powerful. Power Plays and manipulating the Payoff cards especially can weaken leading players and disrupt the investments they’ve already made in a particular strategy.

It’s hard to see why this phase is separated from the Competition phase and also, it seems very arbitrary to cause countries to flip based on a single die roll. The meat of the game hinges on intrigue and anticipating opponent’s moves. The actions in the Lobbying phase at times feel more like a rush to do certain things to disrupt opponents rather than advancing a strategy.

The major tone of all these issues is that the game feels like it needs a few more rounds of refinement playtesting, not necessarily playtesting for functionality. The difference here is that while actions and phases work, players are often left feeling incomplete and that the game could offer a lot more.

When considering what a game sets out to do and whether or not it succeeds, the totality of the game’s mechanisms and theme are the first consideration. On the whole, Incorporated is a mixed bag tied together with a great theme. It gives the feeling of missed opportunities for better mechanisms and existing mechanisms needing more playtesting.

The amazing concept and initial rounds of play promise an epic experience; however at the end of too many minutes of game time, players can see the ineffectual design points a little too easy. It’s not bad, but it doesn’t deliver completely on its promise.

If you’d like to pick up a copy of Incorporated, you can get it for about $50.

Final Score: 2.5 Stars – A laudable feat from a first time game designer, but ultimately, Incorporated pushes itself for too long for what it is and concentrates its play unevenly during a round.

Misses:
• Little variability with multiple plays
• Later phases in a round feel arbitrarily powerful
• Game can stall if players are too conservative
• Engagement drops late in the game