Board Game Review By::
Alex Rosenwald

We review the sci-fi card game Impulse, designed by Carl Chudyk and published by Asmadi Games. This 4x game has players exploring the galaxy in a quick playing scifi card game. 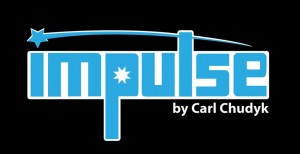 I will admit that of all the themes that I have seen in board games, I invariably end up getting drawn back to the space exploration/sci-fi ones. It’s either because I really love the genre, or because I still secretly wish that an alien ship would come pick me up and induct me into their intergalactic “association of free traders.”

Either way, any game that has a “4x” (explore, expand, exploit and exterminate) space theme and is designed by Carl Chudyk (of Innovation and Glory to Rome fame, some of BGQ’s favorites) is a game that I have to check out.  Impulse, published by Asmadi Games, promises an engaging 4x experience in a quick game and a small box. Does Impulse blast off to a promise of success in the final frontier? Read on to find out.

Impulse is a card-based “4x” game for 2-6 players, that plays best with 3-4 players. Impulse plays anywhere between 30 to 60 minutes.

In Impulse, each player controls fleets of transports and cruisers that are used to explore the galaxy, activate actions, and attack enemy ships. Players are able to gather resources and research new technologies in order to help their empire grow. Actions that each player takes on their turn is controlled by the Impulse, a set of cards that is continually refreshed and added to and shared by each player.

In addition, players can set up their own plan of actions just for themselves. These actions between the Impulse and the individual plan can end up chaining into a very long series of actions. Victory points are scored by trading in resources, blowing up enemy transports and cruisers, and by having fleets survive in the System Core at the center of the space layout. The player who scores 20 points first is declared the winner!

Some space conquest games come with amazing miniatures to represent the different classes of ships, and artwork that captures the vast vistas and wonders that make up outer space. Impulse is not one of those games. The cards are very spartan and functional with their artwork and design, and the ship tokens are generic and functional as well. That said, this does allow Impulse to maintain its relatively low price point.

The cards themselves are sturdy like other games from Asmadi. The light-on-dark printing is easy on the eyes, and makes the colors on the cards pop. The artwork does not contribute much to the game, both in theme and function. One negative to the components is the player race cards and the score track. The score track is arranged in the “snake pattern” which is not the most intuitive, and the material used is thin and not as sturdy as the playing cards are. I understand the desire to keep production costs down, but sturdier materials would have been preferable.

Next, each player gets to use one of their “techs”, which are powers that they alone can use, as opposed to the shared Impulse. Each race starts out with two tech powers (one the same across races, one different) that get changed over the course of the game by playing action cards for use instead of the starting techs.

At this point, the player can begin activating the Impulse cards in order from oldest to newest (ending with the card that was played at the beginning of their turn). Not every card in the Impulse need be activated – it is up to the player whether they want to activate any or all of them, but they still need to be activated in order.

Here is a very brief summary of the actions that are available:

Each one of those actions can be boosted, which is done by having resources that you have mined in previous turns. For instance, a yellow “Draw” action can be boosted to allow two cards to be drawn instead of one if you have two yellow mined minerals. Battles between cruisers are decided through playing cards that match up with cards in the Impulse, and a random draw from the deck.

After the Impulse, players can activate their Plan, allowing them to take even more actions on their turn. Conversely, players can hold off and wait to add more cards to their Plan, but they cannot delay if their plan contains more than 4 cards. At the end of the turn, players trim the Impulse down to three cards, wiping away the oldest of the cards there, draw two cards and end their turn.

Points in Impulse are scored in a variety of ways. You get points for blowing up enemy transports, winning battles against enemy cruisers, trading minerals in for points, and occupying the Core Sector of the galaxy. The player who reaches 20 points first is the conqueror of the sector and declared the winner!

Before I delve into the experience of playing the game, I need to discuss the experience of deciphering the rulebook.  I have played games with some pretty difficult rulebooks to decipher, but Impulse may very well have the worst I have seen. Terribly organized and not cohesive in the least, the rulebook is a major obstacle for access to what is a good game. It took me 4-5 reads, a bunch of forum browsing, and finally finding a player-made alternate version of the rules to really be able to understand what is supposed to happen in the game. I sincerely hope that Asmadi Games releases a better version of this rulebook.

Like other titles by Chudyk, gameplay shines when you are able to take a single action and have that turn into an epic turn where chains of actions come down like an avalanche. While most turns are pretty straightforward, it sometimes took a bit of attention to make sure that we were taking all the possible actions we could, in the proper sequence and in the proper manner.

Even though Impulse appears to be very simple, there is quite a bit of strategy involved in the decision-making. One of the hardest choices to make was the selection of the card to play in the Impulse. If an especially strong card was played, it would certainly help you on your turn, but then it would be in the Impulse available to your opponents. Knowing when to play the right card in order to maximize its advantage led to quite a bit of analysis paralysis at points during our games.

The short time duration of the game is both a blessing and a curse in our opinion. Being able to play Impulse in 60 minutes, as opposed to having to block out an entire weekend to play Twilight Imperium 3, is tremendous in terms of making the game accessible. However, since turns can blow up into chains upon chains of actions, it sometimes made big-scoring turns able to occur quickly, ending the game rather abruptly.

Once we actually figured out how to play, the pace of the game was easy to pick up, and turns went from being halting to flowing in relatively short order. Even some of the more complicated mechanics like boosting and battling became routine after a few times. In the case of boosting, we also found that the design choice of highlighting the values that could be boosted was a smart one, as it became very clear what could be the target of a boost and what could not.

I, like many others here at BGQ, like games that have variable player powers, as it provides a different experience depending on which race/role you get. While Impulse has this at the beginning of the game, the novelty wears off quickly as these powers get replaced by action cards as the game progresses and research actions are taken. It would have been nice to have a permanent race power than two spaces for tech in order to keep that variable power present through the entire play.

In our plays, we found that playing with 3 or 4 players was just the right amount. With two players, it was very easy to hang out in our own respective corners of the galaxy, while with 5 players, things got very crowded very quickly. Also, with a decent amount of analysis paralysis in play, playing with more than four players led to quite a bit of downtime for players off their turn, even with the prospect of battling.

Once you actually figure out how to play, Impulse provides a lot of game in a small box. If you like games by Carl Chudyk, 4x games or games with a space theme, this is a title you could be interested in. Be prepared for quite a bit of work though, as the game is not immediately accessible like some of Chudyk’s other titles.

While difficult to initially learn, it does provide solid gameplay and an enjoyable experience, that stands up to multiple plays due to the variability in the cards that come out each game. Using a shared pool of actions via the Impulse is the novel mechanic that this game implements well.

If you’d like to pick up a copy of Impulse, you can get it for about $23

Final Score: 3 Stars – Good mechanics, awful rules document. It will scratch your itch if you’re looking for a quick 4x-style game, but it will not be everyone’s cup of tea.