We review the new zombie-themed auction game Hit Z Road, buy designer Martin Wallace. In this eurogame, published by Asmodee Games, players are trying to survive a road trip from the Midwest to LA. 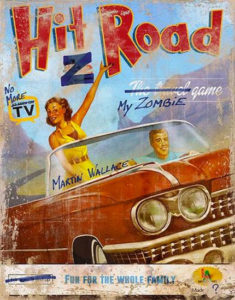 Ok. We are among friends here, so we can be honest with each other. This is a safe place.

There are enough zombie games.

Seriously. We literally do not need another one.

So, when I was made aware of Hit Z Road at Gen Con, I initially laughed it off as yet ANOTHER zombie game. But I was told by my Euro obsessed friend, Walt, that it was really fun. He also made me aware that it was designed by none other than Martin Wallace. Yes. THE Martin Wallace, known for Age of Steam, Brass and Runebound.

Maybe I should give another zombie game a try after all…

Hit Z Road is an auction and dice rolling game revolving around your group of survivors traveling from the Midwest to Los Angeles while trying to survive a zombie apocalypse. No, I am not making this up as I go.

It supports one to four players and clocks in at about 20 minutes per player. The object of the game is to plan and survive eight rounds of increasingly more difficult travel. You win by not getting eliminated. Well, there is slightly more to it – see below.

The components for Hit Z Road were great.

The theme of the components: The setting of the game is from the eyes of Martin, a child who survived traveling from the Midwest to LA. Along the way, he constructed Hit Z Road by creating a game using components he salvaged during his travels.

Rule book: The rulebook is printed so that it looks like it was handwritten on graph paper and it also includes tidbits from his travels in the background.

Player markers: The player markers are different sizes and vary from a driver’s license that was found to a reward’s coupon from a fast food burger joint.

The cards used in the game look like pictures were taken during his journey, along with notes on what happened when each picture was taken. Finally, all of the resources are represented by different colored bottle caps.

The wood components: The wooden tokens are standard fare; however, my kids particularly enjoyed how the zomeeples had little outstretched arms. The wood dice are also nice and the symbols are easy to understand, although I am not sure how Martin, the zombie apocalypse survivor, would have managed to craft these dice during his travels (these are really the only components that did not meet the theme I discussed above).

The cards: As discussed above, we loved the theme presented by the cards, especially the art and the notes. As for the card quality, they are good and did not bend due to humidity unlike many other cards have in my house.

Each player starts the game with five survivors and four of each of the three resources – gas, ammo and adrenaline. The game is made up of up to eight of rounds.

Each round is made up of three phases:

After the 1st player, the 2nd player chooses from the remaining paths, resolves their two cards, and this repeats until every player has chosen a path and resolved the encounters.

The winner is the player who has the last living survivor(s) at the end of any round or the player who collects the most points when multiple players make it through all eight rounds. Points are earned on cards that were encountered as well as by being awarded the bonus cards at the end of the trip.

I liked Hit Z Road. I was originally concerned about the theme; however, this game, while dripping with theme in terms of the components, it is really an auction game with dice rolling used to resolve encounters.

The auction mechanic is fantastic. Essentially, you are bidding your supplies upfront to guarantee you get the choice of the available paths that you want to encounter. Since the cards are face up, you KNOW what you are going to face. This is what creates tension in this game. Should I bid high to take the path I want or do I mind coming in last because none of the paths really scare me?

This is important because, at the start of the game, resources are more abundant and there are less zombies. As the game progresses from level one (2 sets of encounters), to levels two and three (3 sets of encounters for each), resources become less frequent and zombies get tougher, both in number and in showing up in hordes. But I’ll get back to hordes in a minute.

When you win the bid, you decide what combination of resources you will spend. If your bid was five, it can be five ammo, or two gas and three adrenaline or whatever combination of resources you want. What makes this game so fun is balancing using your supplies versus saving them. Supplies are used for bidding, but they will score bonus points to be awarded to the player with the most gas, the most ammo, most adrenaline (most survivors also receives bonus points) and, perhaps most importantly, they are also used to help your survivors out of sticky encounters.

Two gas can be discarded to flee zombies instead of fighting them. This is a good strategy if the card has no points on it (cards that are fled from are removed from the game) or if you just wanted the resources and/or events on the card.

Ammo can be used to make a ranged attack against the zombies at the start of a fight. This is a way to keep your survivors safe because, if you spend ammo and do not kill every zombie or if you decide to skip the ranged round, the zombies move into melee range and it’s your survivors versus the zombies. A die is rolled for each survivor, and the fight continues until every survivor or zombie is eliminated.

This brings me to the last resource, adrenaline, which can be used to save a survivor from a killing blow or to turn a miss into a zombie kill or, potentially, a hit into a second kill. This will only work, of course, if you have the opportunity to utilize adrenaline. Remember hordes? They use a special red die that automatically kill one of your survivors with no way of mitigating it via adrenaline. Hordes are scary.

Finally, I want to discuss special tokens. These are earned during events. I REALLY liked the tokens. For example, you can get some supplies from a radioactive area; but in doing so earn a biohazard token. Later in the game, you may be penalized for having this token if you encounter a card with an event that penalizes a player who is holding a biohazard token. This is another risk/reward decision that I enjoyed because cards that would interact with your token may never come into play or, if they do, you may bid more just so you can make sure you chose a path that does not react to your token. That being said, there are other tokens that give you benefits if they show up later in the game, so they are not all bad.

Like all board games, not everything is perfect. If all of your survivors die, you are out of the game. A series of bad rolls near the start of the game can have you watching from the sidelines or playing Piano Tiles 2 on your phone until the game is finished. While I do not mind player elimination, I could see this as a downside for some.

Also, this game is best played with four. Not every card is used every game to increase variability and uncertainty (this is how you can acquire a special token but its detriment/benefit not show up later in the game); however, there are several cards that are only used during a four player game. If you have three players or less, these cards as well as the usual number of cards are removed from the game.

The four player game leads to the MOST replay value due to the inclusion of the four player specific cards. That being said, after six games, although there is variability in the cards that show up as well as how they are laid out, I found myself wishing for a bigger selection of cards. This would eliminate seeing so many of the same cards, even if they are encountered in a different order. Level one is limited to the level one cards, so, outside of the four cards that are removed from the game at set up, you pretty much know what cards will be coming out, just not when.

I enjoyed Hit Z Road more than I thought I would. It is a game that takes a cliché subject and utilizes a rule set and thematic setting to make it fresh. I would highly recommend Hit Z Road for four players, with that recommendation slightly diminishing as the player count is reduced.

Final Score: 4 Stars – A unique take on zombie survival that relies on a combination of auctioning and dice rolling.

Hits:
• The auction mechanic presents the difficult balance of spending supplies to win an auction vs. saving supplies.
• The theme of the game, playing a game that was created by a child that survived a zombie apocalypse, is carried well throughout the game.
• I liked the special token events, which add the uncertainty in the game.

Misses:
• The game, outside of the auctioning, is somewhat luck driven through both the cards and the dice.
• If you do not like player elimination, you may not like this game
• Although it plays well for two to four players, it is really best with four.