We review the deck building card game Hero Realms from White Wizard games. Hero Realms is their follow up to the wildly successful card game Star Realms. In this card game, players leave the stars for a fantasy themed battle. 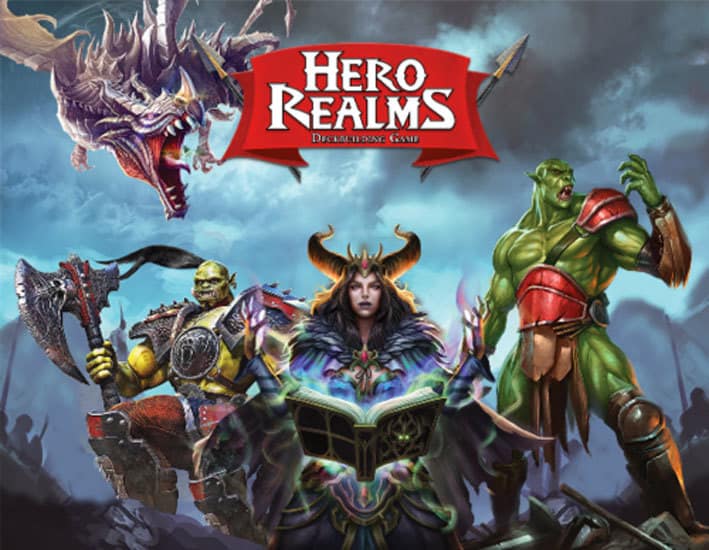 Back in 2014, White Wizard Games rocketed onto the scene with their hit deck building game Star Realms (review here). Designed by Robert Dougherty and Darwin Kastle, 2 former Magic: The Gathering pro players, this card game was an instant hit and sold out almost immediately.

Since then, Star Realms fans have been treated to multiple expansions and even a Lovecraftian offshoot game called Cthulhu Realms. Today, we are going to take a look at the newest game in the *Realms line, Hero Realms. Dropping out of the stars, Hero Realms gives this deck building system a fantasy theme with a few additional tweaks. Is this enough to help it stand on its own? Let’s find out.

Hero Realms is a deck building game for 1-4 players that takes about 20 minutes to play. Hero Realms plays best with 2 players.

Each player starts the game with an identical 10 card deck (unless you are playing with the hero packs) and share an 80 card market deck. During a player’s turn, they will be playing cards from their hand to either attack their opponent or purchase cards from the central market. If you’ve ever played a deck building game before (and especially if you’ve played Star Realms), the mechanics will be quite familiar. The goal in Hero Realms is to reduce your opponent’s life to zero.

Overall I was happy with the components in Hero Realms. The entire game is made up of cards that are printed on a nice stock and contain thematic artwork. I would recommend getting card sleeves though. The cards get a lot of shuffling and the black borders on the cards started showing wear pretty quickly (which isn’t unusual for black bordered cards).

The box for Hero Realms is a nice upgrade over the original Star Realms box, and holds most everything. However if you get the hero packs and sleeve everything, then you might want to look into an alternative storage solution. I’ve fit everything in the box, but the lid only closes about halfway and I have rubber bands holding it together. However, there is a bigger deck box for sale for those interested.

The game’s rulebook is two sides of a folded sheet that does a good job of explaining how the game is played. It also offers alternative game modes at the end.

If you’ve played Star Realms before, you can skip this section and head right down to the Game Experience. Other than a few minor differences that I’ll note at the end, the game play is essentially unchanged.

For those of you who are new, here are the basics:

Each player starts with either an identical deck of 10 cards (attack cards and purchase cards) or a unique hero class, depending if you bought the class packs (more on that later).

On a player’s turn, they may play any cards from their hand they want. Cards will usually provide either attack power or money to spend.

Each card will also belong to one of 4 different factions. If you play two cards of the same faction on a turn, you may also use the ally ability of both (if they have one).

Money is spent to acquire new cards from the shared market, with new cards acquired heading to your discard pile.

All cards played on a turn are discarded at the end, with the exception of champions. A champion will stay in play between turns, providing the player with not only its unique power, but also its ally status. Some champions also have the “Guard” ability, which prevents your opponent from attacking you or another of your champions unit the guard is defeated (and sent to your discard).

Without a guard, you may spend your attack power to attack your opponent, tracked on the included life total cards. Get your opponent’s life to zero and you win.

I think it’s fair to say that if you like Star Realms, you will also enjoy Hero Realms. Star Realms gave us a really solid game play system and White Wizard Games is definitely taking advantage of that.

Hero Realms is inevitably going to be compared to Star Realms (and to a lesser extent, Cthulhu Realms) because they not only share half a name, but the core system is very similar.

The best thing that Hero Realms has going for it (right now at least), and what helps it stand a little apart from its brother, are the hero class packs. While these are sold separately, they are a must have in my opinion if you are going to play this game.

The class packs do two great things. First, they add some variety to the starting decks. Instead of beginning with identical decks, each player has their own unique deck and can focus on making that stronger. This can help alleviate the issue of players competing for the same cards right away in the market. With the class packs, you might pass on the obvious powerful card for one that will have better synergies with your starting deck.

The other thing I like about the classes is how it makes the game feel just a little bit different for each player. Each class has some unique cards that stay in play, outside of their main deck. These give players unique powers that only they can use that are thematically tied to the class. For example the cleric has special powers that can resurrect a defeated champion, or heal a player.

But to be honest, the biggest miss for me right now is the fact that the cooperative/campaign play is not released yet. Despite the few tweaks here and there, Hero Realms is essentially Star Realms with a fantasy skin on it. While I have noted that the game play in Hero Realms is a bit more intense than Star Realms, they still feel very similar.

Yet, what has me the most excited is the cooperative campaign play. That’s really what I want to play. It’s due out near the end of spring, so we are getting close. Yet I can’t help but feel like it was a bit of a miss not having both ready at the same time. I feel like that could have helped Hero Realms stand on its own right out of the gate.

Finally, I do like how Hero Realms has a few game play options to suit each player count. The standard way to play is a 1v1 kill your opponent. However now there is Hunter mode for 3 players (only attack to the left), 2 player team mode (Hydra) and even a 6 player Emperor mode (requires 2 copies of the game or character packs). So having the game not only expands on its original player count, but also gives us different ways to play is a great thing.

Whether or not you like Hero Realms can be easily summed up if you liked Star Realms. If you did, then you will. The game play is largely unchanged, other than a few minor tweaks. That’s not necessarily a bad thing mind you, as Star Realms was a pretty successful game. If you hated Star Realms, then there probably isn’t much here that will change your mind.

So the real question is, should you get Hero Realms. If you don’t own any of the *Realms games, then right now you can pick the theme you like best. If you already own one, I’d honestly say to wait until the end of spring when the cooperative campaign mode is released. If that is as fun as it appears to be, then make the jump into Hero Realms with both feet. However if you do get Hero Realms, you should also consider getting the class packs to be required. I wouldn’t even play the game without them.

I’m definitely keeping Hero Realms, but it’s most likely going to hang out on my shelf until the cooperative mode is released. I’m pretty excited to try out that campaign mode and look forward to seeing how it changes the *Realms experience.

If you’d like to pick up a copy of Hero Realms, you can get the base game for about $20 and any of the class packs for $9 each.

Final Score: 3.5 Stars – A solid *Realms games that offers a few upgrades from its predecessors. This score may rise once the campaign play is released.

Misses:
• Without the campaign, feels a little too similar to Star Realms
• Once you get class packs, everything doesn’t fit back in the box