We review Green Deal, the economic and area control board game from Karma Games. In Green Deal, players are trying to run the most sustainable corporation in the world. We give you our full thoughts on Green Deal in our review. 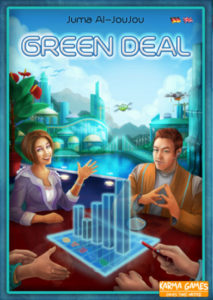 Apparently, the “Green Deal” is a real thing. When searching on the Internet for videos, readers should take notice of the many Green Deal videos posted by UK residents. Is there room for a game with the same name and something of the same subject matter? Karma Games and designer Juma Al-JouJou have presented just such a project.

Green Deal is an auction, tableau building, and area control game for 3-5 players that takes about 90 minutes. It plays best with 4 or 5 players.

Globally and energy conscious corporations (stop laughing) are vying to impress the public and gain recognition for their efforts to be “the best employer, the most innovative, social or ecological company.” Players will do this by starting projects around the globe, but they must bid for turn order to do so. The various projects and their placements, as well as the PR impressions, gain victory points on various scales. The corporation with the most victory points from these activities wins.

Unfortunately, the components for Green Deal are pretty spartan. It’s clear this game was produced on a smaller budget and the components show it. The overall quality is not what you would expect from a bigger budget publisher.

The main board is adequately laid out and the iconography consistent, if unrefined. The card art and material quality are well done but mostly unremarkable. Also included are cardboard and plastic dials for players to bid for turn order. These appear like spinners but they serve adequately. The tiles for placing projects on the map are thin, maybe 1mm cardboard. Finally, the wooden tracking tokens are the standard octagonal pawns seen from other games.

The game board shows three main areas that players will compete for. The Income and Cash tracks reflect each player’s current on hand cash and how much they earn. In addition, the Income track shows how many points players can gain from paying dividends, with lower income players getting a better ratio than higher.

The Sustainability tracks reflect each player’s current total level of the four Sustainability types (Environment, Jobs, Social, Research) from their acquired project cards. Over the course of the game, these will be evaluated and points awarded for a player’s lowest rated track.

The Global Map shows the placement of Sustainability projects throughout the world. As players place these, they will either cooperate or compete with other players, adjusting income as a result.

Finally, a 10 round track shows when the various “Assessments” (scoring opportunities) will occur. Some happen more frequent and scoreless while others only occur at the end of the game. Over these 10 rounds, players will complete four phases: Auction, Accounting, Investment, & Expansion.

Auction – Players secretly indicate their bids on the dials and then reveal.

Accounting – Players pay for their bids and afterward receive income. Turn order is adjusted to reflect the bid values.

Expansion
With each purchase of a Sustainability card, players will place those projects onto the global map working their way across the grid from starting positions. As a project is placed, if it is adjacent to another project of the same type, the player placing the new project decides to cooperate or compete with adjacent players. Cooperation yields a mutual gain in income equal to the average score of the projects. Competition yields a gain and loss in income for the higher and lower project owners respectively.

At the end of the game, an additional Company Valuation based on Income level occurs as well as the previous Assessments. The player with the most points wins.

The main thing that gamers will notice when playing is that this is a no-frills economic excursion. The competition is centered mainly around the auction and comparing the various points mechanisms. At some points, it does make sense to bid low so as to retain cash on hand (for tie breakers) or for big moves later in the game. There are opportunities for points from a variety of strategies, but this could be the spreadsheetiest (yes, that’s a word) of spreadsheet style games.

For some gamers, that style of game is fine. It’s an almost abstract points competition. For this reviewer, the disconnection with the theme is a big miss. Some games stand proudly on their theme’s integration (Terraforming Mars), but any momentum from drawing players into the game by way of the theme here is lost. The categories of sustainability projects hint at broader, deeper mechanisms, yet none are to be seen.

Another player commented during play that this would be a fine game for ten years ago, and this reviewer agrees. The auction and project placement mechanisms feel dated. Interactive auctions with caveats and twists are more common these days. A straight single bid hidden auction is just not appealing. In addition, the placement to gain bonuses or inflict penalties is a tried and true series of cogs that hearkens back to Tigris and Euphrates. Once again, it serves its purpose, but there just isn’t much new to be seen.

What’s unfortunate from all of this is that Green Deal is not a bad game, but not a game that players might remember. It’s enjoyable. It does have some competition. Yet the end feeling is of lackluster gameplay. Had the subject matter or integration with theme been better, it could have been more.

Like another first design that comes to mind (Incorporated), Green Deal aspires to be something of real substance. There are indeed challenging decisions to be made, but overall, the theme and the mechanisms don’t inspire and draw players in. Mostly it’s a mechanical affair with little cut-throat or visceral overtones. There is a game here and a highly functional one, but players shouldn’t expect the unsatisfying mechanisms to deliver any more than the theme.

Final Score: 3 Stars – Green Deal is palatable if you’re hungry for a mathy, minimally themed game. Others should avoid because it doesn’t bring enough fun to the table.