We review Fool's Gold, the new worker placement and set collection game from Passport Games Studio. Players are transported back to the 1800's as they attempt to mine for gold and gems in this new board game. 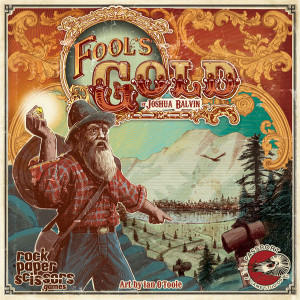 Recently, I watched The Revenant. Was it a good movie? How was Leonardo DiCaprio? Was Tom Hardy amazing as usual?

NONE of that matters. What matters is that I now thank my mom daily for bringing me into this world in the 1970’s! I would have survived approximately eleven minutes in the 1800’s. I would have simultaneously died from starvation, thirst, exposure and scurvy.

What does this have to do with Fool’s Gold? Nothing, except that they both:

Today we are going to take a look at this set collection game published by Passport Games Studios and see if it belongs on your game shelf.

Fool’s Gold is a set collection and dice rolling game for 3-5 players that takes about 60 minutes to play. Fool’s Gold plays well with any number of players.

Fool’s Gold is a worker placement game that takes place in the mid 1800’s during the California gold rush. The object of the game is to amass the biggest fortune (points) by the end of the game. During the game, players will be using prospectors to search for gems and gold nuggets in the 5 different locations on the board. But much like in real life, the more the claims get mined, there will be fewer and fewer opportunities to strike it rich.

The components for Fool’s Gold are average. The biggest problem I had was with the art, especially on the board. It’s passable. It does not grab you. It simply illustrates the five locations in the game (creatively called Hills, Mountains, Forest, River and Lake). In fact, I originally passed on reviewing this game when I first saw the box. It looked so… boring. Which is VERY unlike the game itself!

The cards are normal quality, but, like the board, I was disappointed with the art. The tops of the cards are simply the names of the five locations and the back has simplistic art depicting either gold nuggets, gems, silt (worth nothing) or the two in-game disasters, Foul Weather and False Alarm.

All that being said, I did like the rulebook. It covered all of the rules succinctly and with examples were needed, but was not overly complicated or wordy. Additionally, the one area where the art design worked for me was with the rulebook. It was printed to look like faded pages of an old manual.

We also liked the Miner Meeples and the 1st player pick axe token. They were very good in terms of component quality.

The remaining components, such as the dice, tokens and screens, are about what you might expect.

I tried to provide a high level summary of the game; however, feel free to click this link for a pdf of the official rules.

There are five rounds in the game, with each round representing one year, from 1849 to 1853. The following two phases are performed each round, with multiple steps during each phase:

The player with the most Miners at the location (counting both on the track and in reserve, with ties being broken by the Miner on the highest numbered space on the track) takes one of the following actions:

Winter step – all unchosen cards are placed on the bottom of the location deck, a six-sided die is rolled and that many cards are revealed. The same procedure discussed above is repeated; however, the laid down miner can ONLY choose a card (the coin action is NOT available); if no gold or gem cards are revealed, you will receive nothing.

This is repeated until every location that has a Miner and dice has revealed its location cards for the round.

Start of the next year – At the start of rounds two through five, each player is given another Miner and another coin.  The first player token is passed to the player on the left.

After five rounds, the player with the most points wins, calculated as follows:

I enjoyed playing Fool’s Gold. I love worker placement games, I do not mind luck, and I always appreciate a game with unique mechanics. This game provided all three.

The design and interaction of the worker placement, coin economy and mining mechanics are the highpoint of Fool’s Gold.

The worker placement leads to many difficult decisions. Do you place your miner on a higher numbered space to better insure having first choice while simultaneously costing more money or do you go for a lower number, save money and risk there being no cards available when your turn to choose comes up? Also, the role of the reserve miners placed after passing can lead to you moving from last to first to select since the number of miners placed determines who selects a card first. The space the miner is standing on is only a tie breaker if two or more players have the same number of miners.

Another interesting mechanic that needs to be discussed is the coin economy. Each player begins the game with four coins and will receive another coin at the start of rounds two through five. The only other way to increase your number of coins is to remove your miner from a mining track, foregoing your ability to select a card but adding two coins to your supply. Coins are used to pay for placing your miners or to place wild dice. The benefit of placing your workers is obvious – they are mining for you.

The placement of the wild dice is more risky. The number of dice at a location is multiplied by the number of workers at that location to determine the number of cards that will be drawn. The more cards drawn, the better chance for gold and/or gems to be available; however, placing the die is your turn, so you are making the location more valuable for anyone at that location and will not be able to place a Miner there until your next turn. As you can see, this can be risky but is also a method of opening a location that originally had zero dice rolled for it at the start of the turn.

In addition, you should spend all of your coins every turn as there is NO benefit in saving coins for the following round. All of your coins are returned to you at the start of the next round. When coins are spent, they are placed in front of your player screen and not back in the supply. In fact, one of the actions is to place your worker in front of your screen to return up to three coins from the front of your screen to behind it, available to be spent on your next turn. Needless to say, I REALLY liked the coin economy in Fool’s Gold.

The third mechanic, mining, while not unique, is fun. It is very similar to the dig sites in the game Thebes. What I like more about the design of Fool’s Gold mining locations is that multiple players compete for the resources simultaneously. The cards are drawn, reduced by disasters if any are drawn, and then the remaining successful mining cards are drafted in Miner priority order. I LOVED this aspect of the game.

Another aspect of the mining mechanic that needs to be considered is that, as the game progresses, the mines are thematically stripped of gold and gems while silt and disasters are placed back in deck, so successfully acquiring cards becomes more difficult. Combine this with the fact that you are a) penalized at the end of the game for not having at least one nugget from each location and b) will NOT be able to score the mine from which you mined the most gold nuggets, and the decision of which mine or mines to pursue change round by round, and are significantly driven by player interaction. Trying to guess where your opponents will or will not go is the crux of the game and what makes this game fun.

What did I not like about the game? The art, as discussed above, but this did not impact me once I started PLAYING the game, as the game is entertaining.

The luck factor may drive some gamers crazy. It can be aggravating if you place your miners at the mine you need, you have first priority and all that shows up is silt and/or disasters; meanwhile, your neighbor has only one miner and one die at their location, and the ONE card they draw is a five nugget card. You may REALLY flip the table if your opponent rolls a one during the Winter step and draws the gem they need!

Finally, if you do not have the best memory, but your opponent can count cards like they play poker on ESPN, they will have an advantage over you, especially by the time you get to the fifth round.

Neither luck nor card counting bother me as I personally play games to have fun; however, I would be remiss if I did not mention this as I am sure that some of our readers would look upon these two aspects of the game negatively.

I was pleasantly surprised by Fool’s Gold. I enjoyed the mechanics, the choices and the player interaction. I also liked trying to figure out how to make sure I got SOME gold from every location as well as the anticipation that happens every time the cards are revealed for a location.

Fool’s Gold ended up being a unique take on the worker placement genre and if you are OK with a little bit of luck in your games, you can have a lot of fun with this game. Check it out today.

Final Score: 3.5 Stars – A fun worker placement game with several interesting mechanics that should be played by those that do not mind Lady Luck intervening in your game.

Hits:
• Dual seasons for mining combined with dual uses of miners creates an interesting worker placement mechanic
• Fun mechanic of valuable resources being removed from mines, making each mine less valuable as the game progresses
• The coin economy is very interesting
• The game plays very well for two to five players

Misses:
• Simplistic art direction that does not grab you and scream “Play me!”
• Luck factor will drive pure strategists crazy
• Card counters will have an advantage