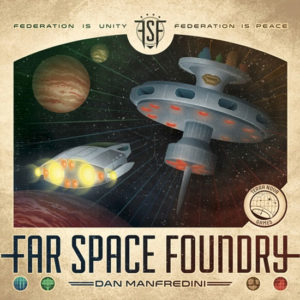 Outer space is a great theme. It’s more of a setting than a complete theme. When implemented, the concept of a future set in a vast frontier with aliens galore can accommodate many different types of games. Sure, adventuring through space blasting enemies is fun, but if you really want to see if sci-fi/outer space is a great theme, see if it can make a more mundane concept exciting. That’s exactly where a game about mining and manufacturing comes in.

Far Space Foundry is a hand management, resource management game for 2-4 players that takes about 20 minutes per player to play. It plays best with 3 or 4 players.

The specific functional aspects of Far Space Foundry would take a bit too long to explain in this article. In brief, players are space merchants mining asteroids for two different types of ore. Mining occurs in the first half of the game and a rondel/mancala mechanism delivers that ore to a player’s freighters.

In the second half of the game, the ore is used to produce goods which can then be “charged”. Points are scored for maximizing the utility of a player’s ships and the number and kinds of products produced. Points are also deducted for empty space on ships or not upgrading ships.

For a deeper explanation of the rondel/mancala mechanism and how the overall game works, the rules (as well as print-and-play files) are available online.

There are some games that, despite their best efforts, fail for no other reason than someone failed to take a step back and look at the big picture. Far Space Foundry has this feeling. The mechanisms are mildly interesting and the theme has a shot at being interesting, but overall package does not succeed.

First, the two-part nature to the game promises to be interesting. One of the things that can easily ratchet up tension is to have two separate mechanical games in which success in one sets up the other. Unfortunately, the mechanics in the second part of the game are so similar to the first that it really begs the question why there are two halves at all.

Second, while Far Space Foundry tries its best to make the central mancala/rondel mechanism interesting, the numbers and card play challenge here has very little to do with the theme and feels like a mechanism in search of a game. If the concept of the mechanism doesn’t make sense, it’s likely to take players out of the thematic immersion and make them see what’s really going on: they’re just playing a game.

Finally, while Far Space Foundry also has all these cool elements of a far off Deep Space 9 theme going on in the idea, none of these really materialize in play. This results in drab, boring play. The concept would be better served by a deeper strategic game. As it is, much of the play depends on chance and the hope that another player sets up a good move.

Overall, even with what it does well, Far Space Foundry doesn’t garner any sustained interest. Beyond learning the rules and playing once or twice, players will want to quickly move on to something more satisfying.

Every so often, a game comes along and can make a player question what they love about board games. For this reviewer, Far Space Foundry was that game. The concept is cool, but the game is not. The mechanisms take players away from the theme into a world of complex mechanisms for complexity’s sake.