While I enjoy games with lots of components and bits, and maybe some nice miniatures every now and again, there’s something to be said for a card game that gives you everything you need in a small and straightforward package. Card games have been consistently delivering through the years, with Illuminati, Gloom, the growing popularity of Living Card Games, as well as newcomers like Imperial Settlers all earning places on the shelves of gamers.

Ember: Shroud of the Shadow Demon by Paw-Warrior Games is a new addition to the mix of card games. Does this Ember glow brightly, or does it get snuffed out before it can shine? Keep reading to find out.

Ember: Shroud of the Shadow Demon (henceforth referred to as Ember), designed by Ben Krieger and Josh Paugh, is a fantasy-themed card game for 2-4 players, that plays in under 45 minutes. Ember plays best with 3-4 players.

In Ember, players take the role of heroes who are attempting to collect ember stones in order to fight off a clan of evil demons. Over the course of the game, players play cards into their Emberscape (the play area), activating various card powers, and changing the ‘mode’ of their turn to give them different abilities from turn to turn. When the Emberscape is filled, players collect those cards for their point value and get to play a bonus card. Play rotates through the players until one player plays their fourth (and last) bonus card, which ends the game, at which point the player with the most points is declared the winner.

In Ember, the first thing players do is decide which hero, and by extension, which deck, they wish to play for the game. Each deck contains cards that are common to all decks, with a few cards unique to that hero’s individual power and flavor. These unique cards help determine whether a deck is more defense or attack oriented in its strategy. Four cards are set aside as Arcane cards, which are reward cards for filling the Emberscape.

During a turn, a player progresses through a series of phases. The Collection phase occurs first, which checks to see whether a player’s Emberscape, the play area, is filled. Normally, the Emberscape can hold a maximum of 5 cards, but that changes depending on the Mode selected (see below). If the Emberscape is filled, a player collects all those cards into their score pile and gets to play an Arcane card. If the Emberscape is not full, this step is skipped.

During the Mode phase, players can play one of their cards to change the Mode of the game, with each card bearing a symbol representing one of four different modes. Mode powers include having your cards protected from attacks, gaining an extra card during the draw phase, triggering the Collection phase with only 3 cards in the Emberscape (as opposed to five) or triggering the Collection phase immediately if the Emberscape contains 5 cards (as opposed to waiting to the beginning of the turn). After this phase, the Draw phase has a player draw a card (or two, depending on the mode).

During the Play phase, a player plays a card from their hand, activating its powers. These cards can be played into the Emberscape, onto yours or other players’ Mode piles, or into score piles. Card powers include allowing more card plays, effects to the Mode, causing extra card draws, forcing your opponents to discard, and the like. In addition, each card has an Ember Stone count, which functions as the score earned when that card is collected and put in the score pile. This is the main portion of the game where action occurs, with player turns and scoring hinging on the cards played during the Play phase. After the card is played, the End phase has players discard down to 9 cards, and draw 2 cards if their hands are empty.

As stated earlier, during the Collection phase, when the cards in the Emberscape are placed in the score pile, an Arcane bonus card is played. The game ends when a player’s fourth and last Arcane card is played and resolved. At this point, players total up the sum of the scores of each card in their score pile, with the player with highest score declared the victor!

Ember provides a game that is quick to play and quick to pick up. While most of the game mechanics are pretty standard (playing cards, activating abilities, etc.) we found the Mode mechanic to be especially innovative, allowing players to determine what special Mode power would most benefit them based on their board state and hand. At the same time, we found messing with other players’ Modes during our turn was rather enjoyable, throwing a monkey wrench in their plans.

Unfortunately, the Mode mechanic is really the only part of the game play we found inspiring. We found the game play to be somewhat repetitive and a bit staid, with nothing standing out in terms of unique or interesting mechanics. There was a little bit of strategy in determining which cards would provide you the most optimal play, but in our opinion, it was not really enough for any serious notice.

I appreciate games and game mechanics that provide individual player powers, and Ember tries to deliver in this manner by having cards unique to each of the decks. However, it was difficult to put our fingers on the specific flavor for each deck. We hoped that there would be some better connections between the theme of the deck and the mechanics, but we found it to be absent. In addition, it was tough to identify which cards were the unique ones (other than the ‘named’ card of your hero) that spoke to the deck’s specific power and strategy.

Having a built-in timer, in the form of the Arcane cards, is a solid mechanic for keeping Ember in its target of being quick to play. As with many other games with a built-in timekeeping mechanic, this prevented games from drawing on for too long. Every one of our plays was under the 45-minute mark, which is a testament to how this game keeps to hitting its time mark.

We preferred playing Ember with either three or four players, but we would not necessarily recommend it to gamers looking for a 2-player game. We found that some of the effects of the cards were pretty rough if you only had one target to attack, and that providing players multiple choices of who to attack through your cards provides a better gaming experience. Even with 4 players, we found that turns went quickly, with limited downtime.

As anyone who has read my previews know, we enjoy being able to create a narrative and tell a story through our games, even if the game is not necessarily dripping with theme. Unfortunately, Ember did not provide us with the ability to do so, with a generic high fantasy theme that did not quite hit home with us. That said, we could see it appealing to those who get really into high fantasy.

Ember: Shroud of the Shadow Demon hits the mark on being a game that is relatively quick to learn and play. The Mode mechanic is innovative in that you can change powers every turn based on what your board state is, but we found the gameplay to be pretty repetitive. Since this game is planned to be a Living Card Game, hopefully some of the expansion sets will add some more innovative and interesting mechanics to boost up gameplay.

If you’d like to become a backer, pledges start at $25 the full game and stretch goals. Ember: Shroud of the Shadow Demon is scheduled to be in backers hands in December of 2016 and you have until Tuesday, August 4th to become a backer. Head over today and check it out. 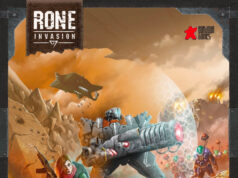