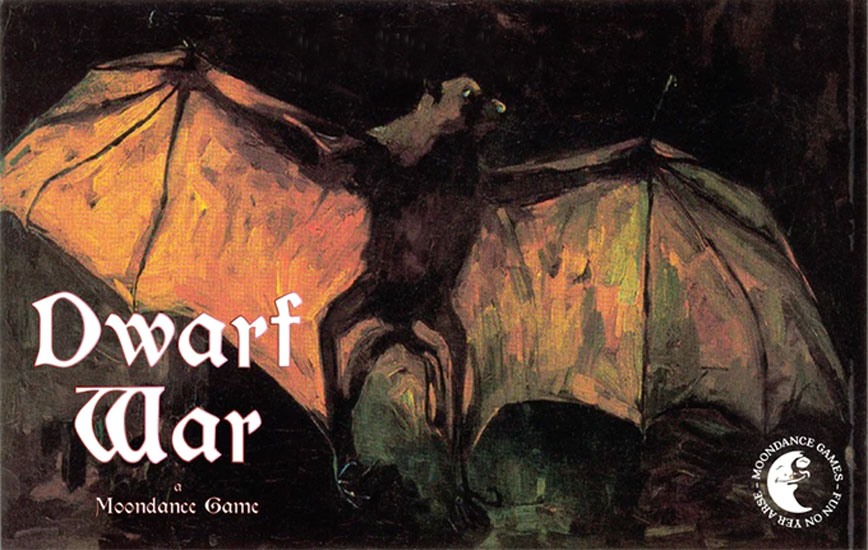 Production values in board games continue to evolve over the years. No longer are gamers happy with a bi-fold board, paper money, and flimsy cards. We really want to get immersed in the theme with great artwork, sculpted miniatures, realistic tokens and other bits. It turns gaming into an experience, not just a thought exercise.

Currently on Kickstarter, Dwarf War experiments in some new territory for what tabletop gaming can be. Produced entirely with 3D-printed pieces and a ton of magnets, Dwarf War is a tactical strategy game for 2 players and can be expanded to 4 players with additional add-ons.

Dwarf War is a light tactical game. It plays out over a 3D terrain of caverns, each with different layouts that produce resources in various amounts. In most scenarios you are trying to control a particular tower or take over your opponent’s base to win the game. It has a bit of resource management and a lot of tactical maneuvering.

Dwarf War is a scenario driven game where players manage resources and attempt to control caverns and towers. Most scenarios end when a player has captured the other player’s base or controlled a specific area, but the size and number of caverns used can have a large impact to the length of the game and the strategies involved.

On their turn, players can have each of their units take one of many possible actions.

First, a unit can move. As you might expect, this just moves the unit up to 5 spaces, including to connected caverns or towers.

Units can also gain resources by planting a fungus farm or mining for gems. Fungus farms increase the number of units you will get each turn. Gems are the main resource used in the game and are spent to cast various spells that can have huge impact on the game.

If I unit is able to move to the command center of a cavern, it can attack the cavern (if controlled by another player) or defend that cavern from another player’s attack. Although the number of attacking and defending units are limited based on the size of the cavern, additional units can support the battle by moving into that cavern or even being in connected caverns.

The final action a unit can take is to dig a tunnel, connecting caverns together. Tunnels can be dug vertically or horizontally so the game takes place over an ever increasing three dimensional space.

In addition to the one-action per unit, each unit is also able to cast a spell each turn, assuming you have the gems to pay for it. Spells include fireballs and lighting bolts, which can knock out opposing units and resources. Other spells can speed up the production of gem mining or instantly create tunnels to new caverns without having to use a unit’s action.

Although it depends a little on what scenario you are playing, the goal is generally to slowly work your way toward your opponent’s base and whittle away at their resources while having more yourself. Being able to create more units and gems gives you more options and will lead to you eventually overwhelming your opponent and winning the Dwarf War.

Without a doubt, playing through Dwarf War is an experience that’s just a bit different than most tabletop games today. The spatial element of being able to build and connect caverns both horizontally and vertically added a bit of a strategic element that took me some time to really wrap my head around. It’s very different than moving around a flat board where there is clearly a single way in and a single way out.

There is no random element to Dwarf War – the options you have before you are the same as your opponent. Combat is determined by the number of units involved for each side and where they are positioned. While I really do love deterministic combat, it does mean the combat lacks much in the way of tension. Also, any units you lose will likely be “repopulated” back in your base next round, unless you’ve lost control of some of your territory.

For the version I had, there were only four predefined scenarios that had a lot of variety in scope, but the game winning conditions were largely about controlling area. While that’s what the game does well, it would be interesting to see if there is any development that might lend to some strategies outside of gaining all the resources and devastating the enemy. It seems that throughout multiple plays, one set of plays, at least for the opening few turns, is vastly superior and makes the first part of the game a little more scripted and a bit less interesting.

The ability for all the pieces to be moved around is interesting and may help lead to the development of additional scenarios. It’s completely modular in a way that really lends itself to being a system that is open for additional development. I’m excited to see what else can be done with these 3D printed pieces.

Dwarf War is a unique take on tactical combat games. The most interesting decisions you have to make revolve around where and how to dig tunnels to connect the caverns in a way that your units and move efficiently into zones where they can gain resources and help increase the productivity of your team of dwarves.

I hope to see additional scenarios that take advantage of the game’s modular setup and allow some creativity.

If you’d like to become a backer, pledges start at €100 for the full, 3D printed game with some assembly required. Dwarf War is scheduled to deliver in June 2017, so head over today and check it out.