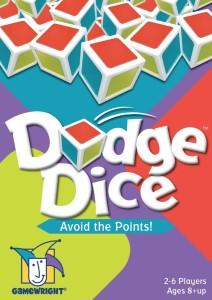 I feel like dice games pull on some deep seeded primal instincts. While it is just a random outcome, I find myself drawn to the action of the die to see if that final rotation takes it from being a successful roll or a failure.

A dice game I recently played had an interesting twist on the traditional dice rolling genre and that game was Dodge Dice from Gamewright Games. The aim of Dodge Dice is to avoid being the person who is stuck taking the points at the end of a round. A generic description I know, however it’s the purpose of two of these dice that is that unique twist. Let’s get to the review to explore if this game is right for you.

Dodge Dice is a dice game for 2-6 players to play in about 15 minutes. In my experience it plays best with 4 or more players.

In Dodge Dice, you need luck on your side as you roll a set of dice hoping to avoid earning any points. A round will end when a player either rolls a stop icon on the action die or all the dodge dice are removed from the round. Players are not alone in this fight, armed with skip chips that can allow them to skip their turn or ignore a result on a roll. When this happens a player will be awarded the points and a new round begins. This will continue until a player has reached 100 points and ends the game. The person with the fewest points wins the game, with tied players continuing to play until a winner is determined.

The dice included in the game are very high quality. The colors and images are etched into the side, rather than just a sticker attached and this gives them a nice feel in your hand. The skip chips are basic purple chips which serve their purpose but are not anything amazing. The box does come with the magnetic closing top which I still think is the best box in all of gaming.

There are three types of dice in Dodge Dice. There is eight dodge dice with red, blue and green sides, a penalty die, and an action die. Players also have those skip chips at their disposal to skip your turn or ignore the result of your roll to avoid earning any points.

The penalty die will determine the minimal amount of points a player will earn at the end of the round.

The action die has six unique icons that either take effect immediately or when the last matching dodge die is removed from the round. The immediate actions either end the round or give the player an extra skip chip. The other actions can subtract points from your total, give the points to the player of your choice, double, or even triple the points on the penalty die.

Each round will have the same process. At the start of the round all ten dice will be rolled and the penalty die will be placed off to the side. Next players will check the action die. If it’ the end round icon, the round is over and that player gains the number on the penalty die. If not, you remove any dodge dice that match the color on the penalty die from the round. The remaining dodge dice and the action die will be passed to the next player. If there are no dodge dice left to roll at the end of a player’s turn, the round ends and you look at the action die to see what effect it has on the final scoring. The next player will take all ten dice and start a new round. This will continue till one player has received over 100 points.

For a game like Dodge Dice to be entertaining it needs to be exciting and engaging on every roll. Fortunately, the game manages to do that quite well. The main reason for this is that ever roll could end in failure due to the one in six chance of rolling an end the round result with the action die. This manages to keep people interested in each roll, but it’s not the round ending scenario that I enjoy the most.

The game mechanic that most interested me was the two distinct ways to end a round. Rather than just relying on the action die, the dodge dice add another level to each roll. I love how the dodge dice in the game start to be slowly whittled away as you progress through the round. It allows for the game turns to become even tenser as you move deeper into a round. This is where the most fun in the game occurs. When you get down to just the action die and another dodge dice hoping you don’t end the round or if you do, not be forced to triple your score. Because the game always ends with someone else’s failure, there are some laughs to be enjoyed.

The game does try to induce some strategy with the skip chips, but it doesn’t work as well as it could. While it does force decisions for the player to make, they are not difficult. Even though you have the option to avoid a roll all together, it doesn’t make any strategic sense to do so. Instead wait to see the result and then decide if you want to avoid taking the points. There are times where you can take a low point total because having a chip to skip that result that gets you over 100 can keep you in the game. I actually play with a house rule that once you roll you must accept the result. This puts more emphasis on players deciding when the risk is high enough to avoid the roll all together.

This game is great for kids to play. It teaches principles of risk and probability that will be in the more complicated games that they learn as they get older. Plus, it is a very portable game that you can take and play anywhere you have a table.

Dodge Dice is an enjoyable and fun experience to play. The entertainment comes through in those tense moments of watching to see if you or another player manages to end the round. While those moments are fun, overall the game lacks major strategic decisions to keep me wanting to come back for more. The introduction of the skip chips attempts to add strategy but the choices are clear when you should use them that they miss the mark. Despite that, the unique types of dice in Dodge Dice adds a new wrinkle to the genre and if you enjoy a game like LCR, I think Dodge Dice is worth adding to your collection

Final Score: 2.5 Stars – While the strategy isn’t the heaviest, it provides plenty of entertaining moments as you roll the dice.

Misses:
• Skip chips don’t add much
• Not many difficult choices