We review Coal Baron: The Great Card Game, published by Stronghold Games. This card game version of the original Coal Baron game introduces some new mechanics and is actually a fresh take on the original game. 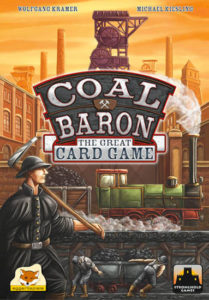 Going back many moons, the marketing and usability efforts when creating a card game version of a board game are a well trodden subject. Even this reviewer, with a recent review of a popular board-to-card game (Castles of Burgundy Card Game) has been annoyed with the trend, especially with games that simply convert a board game to a card game with little innovation.

Wolfgang Kramer and Michael Kiesling, designers of Coal Baron, have picked up the gauntlet to design a card game version of their moderately successful worker placement game. Would these two fall in the same pit (yeah, pun intended, get over it) as the Castles of Burgundy Card Game design?

Coal Baron: The Great Card Game is a worker placement card game for 2-4 players that takes about 90 minutes to play. It plays best with 4 players.

In Coal Baron: The Great Card Game (yes Great is in the title), players act as managers of coal mining firms in mid 19th century England. Using cards-as-workers, players will take actions related to mining coal, building transport, and delivering coal to fulfill orders. Each order has a particular destination and players can also gain bonus points for those destinations or aim for more general objectives for more points. Hopefully it’s obvious that most points at the end of the game wins.

The cards are all standard size for the various decks with decorative-but-unremarkable art similar to the original board game, once again done by Dennis Lohausen. The images are clear and the overall quality is quite good. The cards feel a little thin, but they seem to hold up well to repeated shuffling. There are also some small shift tokens that are pretty standard cardboard.

The nice standout components are the cardboard templates that help players organize their play area. Because players will be building up to three coal trains simultaneously, the template also serves as a guide for which train components (based on heraldic symbols) can be placed at which location (see below).

Each player receives a small deck of numbered cards which represent a player’s workers. In the original game, each player received a collection of single-value wooden tokens as workers to place in various locations. To activate a location, a player needed to place one more worker than was already present. The card game has the same mechanism of placing workers to locations, but in this case, each card has a different value on it.

The action spaces in the game are represented through decks or solo reference cards with the appropriate action depicted. Players can:

The final action available (the wild action) allows players to look at the top four cards from the actions which have decks, take one card, and then place the remainder at the bottom of the deck. This is incredibly useful to find a certain card, but also gives a second chance to take an action if the player doesn’t have the exact worker cards for the original action.

These choices may seem straightforward, but loading coal onto a train is anything but. The player templates are illustrated with symbols that mandate train and coal components have the same symbols to form a complete train (engine excepted). For example, to play a wagon to a train, the wagon symbol must match the train row symbol. Then, to load coal onto that wagon, the coal’s symbol must match both the wagon and the train row symbol. Each row has two symbols so there is some flexibility.

Readers who have read the Board Game Quest review of Castles of Burgundy: The Card Game are likely to grok this reviewer’s first point. The card game does not bring a smaller table footprint than the board game. This would be a stronger criticism if it were not for the additional play advantages of this game, which are illustrated below. However, gamers looking for a more compact version of the original game will not be assuaged.

What the Coal Baron card game does bring is a much more streamlined, fast, and different style of play. Even when compared to the original board game or other contract fulfillment style games, it plays quickly while maintaining a healthy level of strategy and tactics. What’s most surprising is that the cumbersome actions and components of the original game (the mine shaft), when distilled into a card game, actually provide a very enjoyable experience.

The primary challenge in the Coal Baron card game is to take a string of actions in the most efficient way to fulfill the most points in contracts while collecting points from other sources along the way. The multiple ways to make this happen, through use of the wild action or taking the bonus actions, offers an optimization puzzle which is different enough from other worker placement games to feel fresh.

The other complexity inherent in the game feels as if it was tacked on, but delivers some of the most enjoyable frustrations. The requirements of building trains using the appropriate symbols can derail (you won’t get any pun relief here folks!) the most calculated plans and force players to stay flexible. There are many moments of bated breath as opponents’ turns go by in which players will desperately hope a card stays available for their turn.

However, a consistent criticism from this reviewer of many games is that they don’t offer enough variability. The same is true here. There aren’t any mechanisms that change the nature of the game from play to play, so winning strategies stay winning as long as players can accomplish the same execution of optimized turns. Overall, the depth will keep players coming back, but it can wear out its welcome.

Coal Baron: The Great Card game is better than Coal Baron. In almost every respect, playing the card game is a more enjoyable experience than the board game. Even though the restrictions on building trains feels almost arbitrary, it’s an exciting puzzle to figure out and find ways to block opponents. As a worker placement game, it offers a small but new twist to strategically selecting locations to play, making for an overall challenging experience.

If you’d like to pick up a copy of Coal Baron: The Great Card Game, you can get it for about $30.

Final Score: 4 Stars – While it doesn’t have a smaller footprint than the board game, it offers an exceptional optimization experience with surprising game play.