Board Game Review By::
Tyler Nichols

We review Carrotia, the cooperative game where players must work together to guide a rabbit through a farm maze to collect carrots. With both a real time aspect and also a puzzle one, Carrotia is definitely unique. 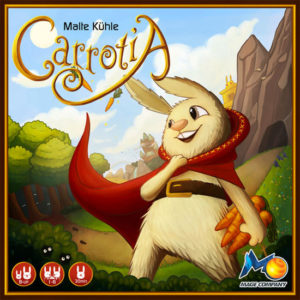 I have a love/hate relationship with rabbits. I will admit that they are cute, soft and my kids love them, but they are a menace in my vegetable garden. Fortunately, this long-standing battle between Peter Rabbit and Mr. McGregor that occurs in my garden every summer didn’t cloud my judgement playing as a rabbit in Carrotia.

In Carrotia, players work together to build and navigate the maze to collect enough carrots to feed the colony while avoiding the birds circling above. Let us get into the review to see if this is a game you want to add to your collection.

Carrotia is a cooperative and tile placement game for 1-6 players to complete in around 30 minutes. In my experience, the game is best enjoyed playing with 2-4 players.

The supplies are getting low and the rabbit hero must brave the wilds to collect carrots to feed the colony. The game is separated into two distinct phases of maze buildings and movement.

Each of the three rounds will start with players receiving a set of tiles and will work together to build a maze for their rabbit to traverse in a very limited time. Then players will have to take turns moving the rabbit token through the gauntlet they just created, trying to avoid the birds that can move the rabbit or affect the carrots on the path. If players are able to collect enough carrots by the end the third round, they will win the game.

Many solid components are included in the box. It was clear that publisher Mage Company is not skimping on the quality of the tiles, cards and tokens… and there are a lot of them in the box.

There is also the addition of three sand timers all which clock different times that are used to denote building times for the three rounds. I do have a slight issue with them being used in the game. With everyone focusing on the map building, it is easy to miss when the timer is done. While they are solid quality, I ended up using my phone’s timer for my needs.

The best part of the components are easily the dice. Each bird’s movement and action is tied to the result of these dice, which match perfectly to the color on the tokens. The images are very clear and not just pasted on stickers. Bonus points for that.

Before the tile placement phase occurs, a quest card is flipped over which shows the start and exit tiles and where birds and carrot tokens will be placed. In the first round, players will place the tiles to form a 3×3 grid. The 30-second timer will be used and players will take turns placing one tile on the table to form the maze.

Players are also allowed to replace tiles placed on the table by other players. One requirement of this map building is that the edges for each tile should match the edge of the other tile next to it. Players must be aware that the rabbit cannot move backwards during the next phase and will need to build their maze accordingly.

Once the timer runs out, the players will stop placing tiles. If the sides of the tiles do not all match or the rabbit cannot make it from the entrance to the exit tiles, the players will have to take a penalty. This will be paid by adding an extra bird token to the board. Players will then be able to swap or rearrange up to four tiles to fix the maze. Once any corrections are made, the rabbit token will be placed on the entrance tile and start the movement phase.

Each player will take a turn moving the rabbit one tile but before they do that, they must roll a die for each bird in the maze. The die will indicate the direction the birds will fly, or whether to move it onto a tile with a carrot or rabbit on it.

Each bird will have two effects depending if they land on a tile with a rabbit or carrot. The birds can move the rabbit, carrying carrot tokens, destroying them or re-activates a character ability. They are definitely a force to be reckoned with as you move around the board.

Players will be able to know the movement of these birds before they take their action, allowing them to build a strategy. In the first round, players will have a limited movement to ten tiles to collect as many carrots as they can and get to the exit tile. If they are not able to do this, they will not keep any of the carrots they have gained this round.

A quick note about the effects that birds will have on the game. The next round will start with players receiving new tiles and a new quest card. This card will show a 4×4 map that players will have to build on the 3×3 map they have on the table. Players will get 60 seconds to build this map and get 15 moves to reach the exit tile. The same process will occur in round 3 with players building a 5×5 maze in 90 seconds and 20 movements to complete the maze. One special action you can take during the final stage is to forego your movement to place two carrot tokens on the board.

The game has two distinct feelings while playing it. The best way to describe the tile placement/maze building is a thunderstorm with the movement being the calm after the storm. The tile laying aspect of the game isn’t an overly challenging process. Even though the tiles you receive are random, you should be able to make a decent path from the start to exit tile picking up carrots along the way. Sure, you will have to make a decision on which path is optimal to collect the most carrots, but it is not a mind melting process. What allows this to be as panic inducing is the time limit.

The time you get each round never feels like enough time to build the map properly. Having the two rules of not being able to move the rabbit backwards and edge matching makes the labyrinth building just add another layer of complexity to the puzzle you have to put together. You do not want to mess this up because adding an extra bird to the map can hurt your overall chances. This, with the limited movement each round, forces players to examine the quest card and try to formulate a plan of attack in a very short amount of time. This leads to a lot of rapid fire communication that never goes wrong…

Owners of this game will have to know their audience well, because in my experience, this crazed map building is hit or miss for people. I enjoyed being forced to quickly assess the quest card and build a map in a short amount of time. Players who are more analytical and deliberate will feel overwhelmed by this gameplay.

As long as you can get the maze built decently well, the movement phase is very simple for the players. The one wrinkle is the birds that are hovering around the maze. These birds can be quite a menace for the players by moving them around the board or, more likely, moving, destroying or altering a carrot token. Players will not know the true impact of the birds until you roll the die to determine their movement. You will be able to see the movement of the birds before the rabbit moves, which allows you to protect the rabbit. However the same can’t be said of the carrots.

The problem with carrots being affected is that the margin for error in the game is very small due to on average thirty carrots being available throughout the game. Losing just a few of the high value carrots tokens can make the rest of the game nearly impossible. There is a slight catch up mechanic, allowing you to forgo your turn to add another two carrot tokens to the board, but if you miss many carrots in one round this will not help a ton. This can make the game extremely frustrating because outside of a few character powers, players cannot do a lot to change the course of the birds. It can be disheartening to build a perfect labyrinth and then having the whole round fall apart due to the bird’s movement.

The gameplay in Carrotia is definitely unique. Each phase has its own feel with the combination of the frantic maze building contrasted with the calmness of moving around that created maze.

I found the game to be polarizing with the people I played with. Some loved this aspect, including me, while others thought it was too sporadic. I admit that there were times where I wish the rabbit hero in Carrotia had more influence on the bird’s movement because they are the determining factor in winning and losing.

Overall, the game was an enjoyable experience and something I would enjoy opening during game night because the rules in Carrotia are easy enough to teach and it’s fun experience.

If you’d like to get a copy of Carrotia, the current printing is sold out, but a Kickstarter has just launched for a new printing of Carrotia.

Misses:
• Hit or miss with enjoyment of players
• Lack of stopping bird’s actions can hurt the experience