We review Black Hat, the trick taking game from publisher Dragon Dawn. Black Hat combines elements from a trick taking card game and merges with with a game board into game about hacking a computer. 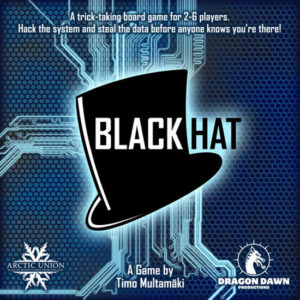 Computer hacking has a notoriously cool aura surrounding it. The genre spans the worlds of crime, technology, and sometimes even a little bit of science fiction. Working in IT, this reviewer knows that real hacking is hardly glamorous, usually involving many, many hours sitting in front of a computer looking at databases and file systems with a (hopefully) steady stream of caffeine. Only board games with flashy graphics and quick gameplay can deliver the Hollywood feeling. Dragon Dawn Productions latest game takes on the challenge.

Black Hat is a trick taking game for 2-6 players that takes about 45-60 minutes to play. It plays best with 4 players.

Player pawns on a board representing a computer network stand in for the computer access of players as they navigate through information systems. By winning card tricks, players can move their pawns through systems with the aim of staying on the most valuable spaces when scoring occurs at the end of a round. Players will gain points for cards in hand and the spaces their pawns occupy, however, the lowest score wins.

The components for Black Hat are nice and really deliver the theme. The cards are of decent quality and are illustrated superbly, even going so far as to include flavor text. Likewise, the main board for pawn movement has an exceptionally well-illustrated design. The wooden hat pawns, representing players, are also fun and aren’t difficult to use on the board.

Once the game is set up and the powerful, eponymous Black Hat card is dealt to a random player, you’re ready to begin.

As this is a trick taking game, the leader of the trick plays a signature role. This player chooses a single or group of cards to play. There are no suits in this game so players must only follow the number of cards the lead played if they are attempting to win the trick. The player who played the same number of cards as the lead with the highest value will win the trick (this could be the lead player if no one over-played that player). Jokers are present in the game and will match cards they are played with or automatically assume the maximum numerical value (14) if played alone.

The catch is the Black Hat card. If this card is played, it acts as a Joker and at the same time changes the rules of the trick so that the lowest value that matches the number of cards played by the lead wins the trick. The additional caveat is that holding onto this card isn’t so great at the end of the round, since it gives an additional 5 points.

The winner of a trick can either advance their own pawn on the main board OR if another player’s pawn is on a negative value space, they may move that player’s pawn. Board spaces are mutually exclusive so if a player would normally land on a space occupied by another player, they advance ahead to the next available space. Some paths diverge so there are a couple of choices to be made in this regard.

If a player is out of cards after a trick, that ends the round. Players receive points for cards left in hand as well as the point values of spaces they occupy. Since lowest score wins, players will want to tactfully choose whether or not they want to win a trick based on their board position. However, if they fall too far behind or move too far ahead, they lose the additional value of jumping forward over players.

The game ends when a player enters the last space on the board (a valuable -5 point space) or if no players can move pawns. This could happen because certain valuable “Honeypot” spaces lock a pawn in place. A final scoring is conducted and the winner declared.

Looking at the big picture, Black Hat under delivers. The issues present are significant enough to detract from the game, but at the same time, in a perfect play scenario, the game is indeed fun. These limitations in the design are the main things to warrant the average score given.

The foremost issue that keeps cropping up during play is that there is no interaction between the trick taking mechanism and the pawn movement mechanism. Players familiar with Clank! or Ticket to Ride know that two layers of mechanisms can work seamlessly together. The card play can drive the board play. In Black Hat, this is not present besides calculating the right moments to win tricks, depending on the number of players this could more interesting (more on this later). The disconnect between the two hints at a more exciting game that could have been.

In addition, with such a fantastic theme, players might expect some mechanisms that involve playing certain combinations of cards to unlock spaces or additional trump rules when a player occupies a certain space. There is a significant disconnect from the theme that relegates the game to a more abstract level. This is really unfortunate because the theme is so well illustrated.

The aforementioned player count issues are also problematic. At four players (especially ones who love to throw down cards), the game shines. There is tension and the movement tactics matter. If an experience deviates too far from this count of players, the game slows or pawn movement can feel like insignificant plodding. At higher player counts, huge jumps also hasten some more interesting strategy. The addition of more movement rules (there’s an additional Robot player variant for two players) would have been more welcome as would have been different board path designs.

Finally, one of the most basic misadventures is the introductory game. Included are additional overlay tiles that modify the main board by providing new spaces. This is a great addition to the game, however, playing for the first time on the main board is lackluster and comes off as a defensive race. The main board would have been better double-sided or engage players quicker with a more dynamic layout to begin with.

The experience with Black Hat tells a tale of a game that might have been. It’s definitely fun with a good four player group, but it’s missing some depth that would allow it to stand apart from other trick taking games. Indeed, even the absence of suits on the cards adds lightness to a game concept that begs for more complexity. Likely this is a title to bring out with very specific players and circumstances, but it won’t be hitting the table often.

Final Score: 2.5 Stars – The game woefully underutilizes the theme and play options between cards and the board, but it’s a fun experience with the right number and size crowd.