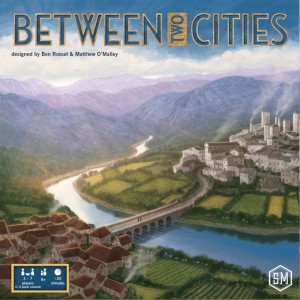 Stonemaier Games has built itself a pretty solid reputation. Their small company has released two medium-weight games (and an expansion), all of which could be considered a resounding success. I’ve played Viticulture and Euphoria more times than I can count, so I’m always interested when I hear they have a new game coming out.

And new game they do as Stonemaier is back on Kickstarter with their latest campaign, Between Two Cities. This is the first title to be published by Stonemaier that wasn’t developed in house by designer Jamey Stegmaier. Instead, they turn to veteran game designers Matthew O’Malley (Diner) and Ben Rosset (Brewcrafters, Mars Needs Mechanics) for the creation of Between Two Cities. Can Stonemaier keep their streak of great games alive on the back of a different designer? Let’s find out!

Between Two Cities is a tile drafting, set collection and city building game for 2-7 players that takes about 25 minutes to play.

I think that if the games Sushi Go! and Subdivision had a baby, it’d be Between Two Cities. The goal of Between Two Cities is for each player to build two cities of 16 tiles each. You will be working with the players on your left and your right to cooperatively build your two cities. Each turn, you will to play one tile into each of your cities, hopefully earning you points in this set collection game. However you can’t just focus on one city, because at the end of the game you score victory points for only the lower scoring of your two cities.

Learning Between Two Cities should is fairly easy, the hardest part being remembering how all the different tiles score you points. The game itself is played over three quick rounds and should only take you about 25 minutes or so.

Players start the first round with a hand of 7 city tiles. On a turn, each player will secretly selects 2 tiles to play. Once they’ve done that, all players reveal them and collaborate with the player on their left and right to place one tile into each of their cities. Important note: Cities must be built into a 4×4 grid, so placement is important. Each city will always be getting 2 tiles a round (one from each player).

The different types of city tiles are:
Shops: Scores points based on how many shops there are in a row or column.
Factories: Scores points based on having the most factories among all cities.
Taverns: Scores points for each set of different taverns (there are 4 different types and you gain the most points by having one of each)
Offices: Score increasing points for how many total office tiles you have; also score bonus points for offices next to taverns.
Parks: Each park is worth 2 points, and each park cluster is worth increasing bonus points (a cluster is 2 or more parks next to each other).
Houses: Score points based on the amount of other buildings in your city (Max of 5 points per house if you have all the other buildings in your city). Lose points if placed next to a factory.

After players have placed their tiles, the remaining tiles in your hand are passed the left (or right in the 3rd round) and players start again with choosing 2 tiles. Once players have done this three times the round is over (and the last tile discarded).

In round 2, players will be placing duplex tiles. These are preset tiles with 2 different buildings on them. Each player draws 3 tiles and chooses two to play. Placement is the same as the previous round, but you are essentially placing two tiles at once.

Round 3 plays the same as round 1, but tiles are passed to the right.

After round 3, the game ends and each city is scored. Players earn victory points for the LOWER scoring of their two cities. The player with the most victory points wins.

Overall we had a lot of fun with Between Two Cities. This is definitely Stonemaier’s lightest game to be sure. The play time is listed at about 25 minutes, but once you get familiar with the tile scoring, you can definitely finish a game in less than that.

When you are collaborating with your fellow builders, you are not allowed to say anything about what may or may not have been passed to them, which is very tempting to do. However you can pass tiles that you know will help your combined city and hope your opponent picks up on the hint. Of course, there have also been times I’ve passed a tile that would be perfect for our city, only to watch my opponent use it in his other city! Unfortunately punching your partner is against the rules (probably). On the other hand, you can make sure not to pass something that your opponents other city clearly needs. Granted the only method for tile denial is to use it in one of your cities, so you have to make sure it’s also not a sub-optimal choice for you.

I’m glad they changed the game up a little in round two. Place the duplex tiles required a bit more thinking as they still have to fit within the 4×4 grid. The tiles go both horizontal and vertical, so it will require a bit of planning to make sure they get played optimally. But one of the main reasons I like round two is that it adds a bit of variety to a game that could easily start to feel “samey” otherwise.

Overall I think that the tile scoring felt pretty intuitive, with some tiles needing more explanation than others. Parks are probably the most confusing tile as you have to teach people what a cluster is and how to build them.

One thing I wish Between Two Cities had more of was interaction between different tiles. Offices score an extra point if placed next to a tavern (neat, but hardly game breaking). The best example of this is with the house tiles. They can score up to 5 points each, but if they are next to a factory, they will only score a maximum of 1 point. I liked this rule a lot and really wish there were a few more negative placement rules in the game. Right now, it’s hard to place anything that’s a bad choice. Even though it’s impossible to focus on every type of tile and you’ll have to make some decisions on which way to go, ultimately every tile you end up playing should benefit your city. I wish they would have utilized negative placement a bit more.

Finally, I really liked how you score the lower of your two cities at the end of the game. This makes sure you can’t just focus in on one of your cities and dump your crappy tiles in the other. The fact that you have to collaborate with your neighbors leads to some interesting player interaction. There will undoubtedly be wild accusations of one player favoring their other city over yours. But that’s part of the charm of Between Two Cities.

Between Two Cities ended up being a fairly light, but overall I really enjoyed it. Both the card drafting and the partner collaboration during the game were excellent choices for the mechanics. Like many drafting games, it also scales exceptionally well. Playing with 3 players up to 7 doesn’t really add much to the play time. In fact, I think it gets more interesting with more players. When you are at the higher player counts, more tiles come out into the game and the final scores end a bit more of a mystery.

While I wish there were a bit more interaction between individual tiles and cities as a whole (factories are the only thing that compares multiple cities), I think there is a nice amount of diversity in the tiles. They all feel fairly balanced where the decision on what to play isn’t always obvious. You’ll want to play just about every kind of tile into your city, but ultimately you’ll have to pick a focus. One of the nice things is that with 2 players working on each city, you have a good chance of getting the tiles you need.

If you are looking for an interactive game that’s both easy to learn and quick playing, Between Two Cities is absolutely worth checking out.

If you’d like to become a backer, pledges start at $29 the full game and stretch goals (the special edition is $39). Between Two Cities is scheduled to be in backers hands in November of 2015 and you have until Monday, March 16th to become a backer. Head over today and check it out.