Board Game Review By::
Tahsin Shamma

We review Agricola: Family Edition, the lighter version of this award winning game from designer Uwe Rosenberg. In this worker placement game, players must run their pre-industrial farm as best as they can. 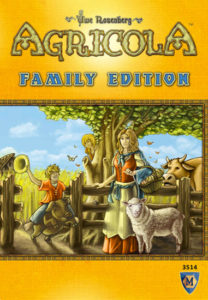 Sitting down to a “family” style game should be an affair akin to watching a 1950s TV show. In reality, the likelihood of hurt feelings, boredom, and mismatched experience levels can bring the whole event to an episode of The Simpsons. For the brave, a popular brand now tries to bring the cutthroat nature of hardcore “Gric” play to the extended relatives of gamers while still maintaining a casual, familial demeanor.

Agricola: Family Edition is a worker placement game for 2-4 players that takes about 45 minutes to play. It plays best with 3 or 4 players.

The life of a farmer in the pre-Industrial age is a struggle for sustenance and growth of family. Agricola: Family Edition replicates a farming family’s attempt to provide enough food for themselves, as well as increase their output of animals or wheat. The players compete with each other by placing workers to gather resources, corral animals, and build structures to increase their output as a whole.

The game components present are similar to other Uwe Rosenberg harvesting designs with the exception of the larger than life farmer meeples. Pasture tiles hail from the Caverna school of construction by incorporating Agricola’s fences into the tile. The requisite sheep, pigs, cows, wheat, wood, reed, and stables are in attendance with standard wooden miniatures. Additional cardboard tiles of decent quality represent buildings and improvements.

A noticeable miss occurs with the rulebook. Although Uwe Rosenberg’s “designer-as-teacher” commentary decorates the flow of instruction, it feels distracting here. A less flavorful rules presentation would have helped to get new Agricola players to understand the nuances of play. The rules also deserve a set of eyes unfamiliar with Agricola as some of the flow of play and rules interpretations need experience from the full game to be understood correctly.

As in many other worker placement scenarios, players are presented at the beginning of the game with two starting workers who occupy a farmhouse. Over the course of 14 game rounds, players will use their workers to collect resources or use those collected to build structures and improvements. At the beginning of the game, only about a third of the game’s worker spaces are available. Each round the turn marker proceeds along a path indicating which new space is available to be used.

At the beginning of a round, certain spaces are replenished with resources. Next, during each player turn, players will place a single worker on a space. They immediately gain the benefit of the space. The next player in turn order does the same. This continues until all players have placed all their workers. The round marker is advanced and players repeat the process.

At certain points between rounds, players will conduct a harvest. This involves players removing collecting wheat from their farm as potential food, feeding workers, and adding newly bred animals to pastures. If players are unable to feed all their workers, they take a penalty in the form of a begging marker.

Along the round marker path are also distinguished building tiles. The first player to build each structure gets the benefit of additional points at the end of the game for certain resources. The game provides exactly FIVE of these buildings with no option of rearrangement.

At the end of 14 rounds, players receive points for tiles constructed, house and farm improvements, and points for wheat or animals raised. The additional structures provide more points. The player with the highest total points claims farming supremacy.

Due to the well-worn a path of the Agricola brand, it should be safe to assume that a release of a Family Edition should provide a predictable level of enjoyment and satisfaction with play. The design doesn’t deviate from the enjoyable flow and mechanisms of Agricola, but there are obvious misses here. The result is a game that feels at best, unremarkable and at worst, unnecessary.

The main aspect of value is the joy of farm-building and planning in a shortened play time. The game moves casually, while relishing in blocking worker placement to challenge players. The focus is clearly on expanding to a large farm with stacks of fields and pastures at the ready. The game plays and feels like its older brother Agricola.

However, the main culprit for dissatisfaction is a deviation in design that provides a predetermined array of worker actions that remain the same from game to game. Conspicuously absent are the undeterminable actions which are revealed each round in Agricola, as well as the large variety of buildings to construct. This results in a game which can largely be played the same with each instance. It also notoriously invites the same winning strategy to be employed every game. While this may not ever happen over the course of ownership of the game, it bears noting that the elimination of this mechanism limits the replay value to a high degree.

The second major point of weakness for Agricola Family Edition is that it fails to realize what would be assumed as a major design goal. A “family” version of a game is assumed to be one that is playable with non-gamers and younger children. While non-gamers will probably be fine following the indirect goal accomplishment, it’s not as easy to teach as worker placement games such as Lords of Waterdeep.

Here, resource management is coupled with farming and animal husbandry. Sure these are hallmarks of Agricola and they’ve been as streamlined as possible, but these are still curveballs for new players. In addition, younger players will also have difficulty with the needs of play. For eight-year-olds (as indicated by the box) to enjoy play, they need to be familiar with mental addition, subtraction, multiplication, and division, not to mention multi-step planning. Depending on your local eight-year-old, this may be a big challenge.

This ultimately is where Agricola Family Edition misses the mark. Because it aims to provide a streamlined, simpler play, it must focus on something to distinguish itself. Whereas Agricola’s younger cousin Agricola: All Creatures Big and Small focused on animal husbandry, Agricola: Family Edition challenges players with gathering as much food as possible. This seems like a daunting and noble goal, but it falls flat. There is nothing new or unique in the play for seasoned Agricola players and so they may be left wondering why offer this at all. The answer is really the shorter play time. For some, half a game of Agricola could be enough.

For those who already own Agricola and All Creatures Big and Small, there is little new to purchase here. A more ample name for this product is Agricola: Training Edition. Players with two or three games of Family Edition under their belts will find little more to explore. It’s a good game for seasoned gamers to bring to family gatherings, just be prepared to win repeatedly and be bored.

Many gamers dream of bringing their favorite games to the family audience. As much of a tradition as football is on an American Thanksgiving holiday, some gamers dream of the post-meal family game. Agricola: Family Edition serves dutifully as a great introduction to the Agricola play style and brand, but it misses opportunities to be interesting. Rather than winning gamers hearts, Agricola: Family Edition will likely only leap off a game shelf to introduce new players to the hobby while seasoned gamers yawn through the process.

If you’d like to pick up a copy of Agricola: Family Edition, you can get it for about $40.

Final Score: 2.5 Stars – While the overall package simplifies and coalesces the play of Agricola to an essence, it does little to endear itself for many repeat plays.