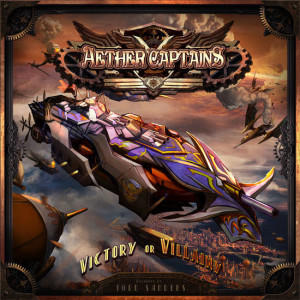 Asymmetrical game play? Sign me up! OK, I should probably hear a little about the game first, but usually when I hear that phrase, I get excited. I absolutely love it when I encounter games where each player gets to play the game just a little differently. Stronghold, Cthulhu Wars, Trieste, and Netrunner are some of my favorites.

Today, we are going to take a peek at a new asymmetrical game looking for funding on Kickstarter. Aether Captains is a combat based game for 2-5 players in a 1 vs. many battle for dominance. Is it fun? Let’s take a look and see.

In Aether Captains, one player takes on the role of the Commander and controls a powerful navy zeppelin (or two), while the rest of the players control one of the Sky Captains. The Zeppelins are massive, lumbering warships with multiple hull sections that will fly around the skies of Arkady, punishing the nimble sky captain ships. The other players, each controlling a specific faction and three of these smaller ships, will be tasked with not only damaging the Zeppelin(s), but also completing a specific objective.

Since Aether Captains is an asymmetrical game, the two factions will approach the game a little differently. This also means explaining the game can be a bit complex, so we are going to try and keep things brief here. You can visit the Kickstarter campaign page for more in-depth information on how the game is played.

One player is selected to be the Navy Commander and gets control of one or two Zeppelins (depending on the amount of players). Each other player gets control of a Sky Captain faction and three smaller ships.

The skies of Arkady are setup by randomly drawing hex tiles and placing them around the neutral, central tile.

The Commander’s zeppelin is comprised of 6 different sections, each made up of a 6-sided die. Each side of the die has different stats on it (representing attack, defense, engine, etc…), and as the zeppelin takes damage, the stats will change when the die is rotated.

The planes of the Sky Captain are represented by a single 6-sided die and, like the zeppelin their stats will change as the plane is either damaged or upgraded.

Aether Captains is played over a series of rounds. Each round, the Sky Captains get to take their turn, followed by the Commander.

Each Sky Captain has 6 action cards, and a player can choose three of them to activate on a turn. Different actions include: Moving, Collecting Resources, Recruiting crew members, repairing/upgrading their ships, hiding from attack on a tile or Attacking the Zeppelin or a city.

Combat is accomplished via a series of 12-sided die (d12) rolls. If you are on a hex adjacent to the zeppelin, you can attack it. For each ship you are attacking with, you roll a d12 and place your die on the zeppelin grid in the corresponding spot. You then roll a d12 again and check if your total is higher than the attack value of your ship-die. If it is, then the Navy Commander rolls a d12 and checks the defensive value for that particle ship section. If the roll is higher than the blue defensive value, the defenses hold and the attack is ignored. If the defense fails, that ship section takes one damage and is rotated one quarter a turn to the next side.

The Navy Commander player has similar actions, and also a few of his own. The Commander has a deck of 18 action cards, and each has their own cost to use. The Commander gets 6 points to use during the round and can customize his actions by spending those points. Actions include:

Move, Recruit, and Collect Resources, which work similar to the Sky Captains cards. The Commander also has a double move card. Other cards the Commander has are Telescope: which lets you look at a sky captains action cards and Force Majeure, which lets the commander force a player and move each of his ships to an adjacent tile. This is useful if the player is hiding.

The Commander’s attack works similar to the Sky Captains, however it’s much more powerful. All attacked ships on the chosen tile are placed on the zeppelin’s grid. The Commander can then attack with all guns on the zeppelin that can reach the ships. The white squares on the side of the zeppelin die indicate its range. The Commander rolls a d12 and compares the number to the zeppelin’s section’s red attack number, if higher it’s a hit (no defensive rolls). Damage is equal to another d12 roll divided by three.

There is even more to the game play, including capturing cities, dealing with weather and storms, looting resources, using crew, and launching bombs (powerful but risk attacks). However we are running long already in this section, so if you want to know more, head over to the campaign page for more information on the game play.

If you can’t tell from the How to Play section, there is definitely a lot going on in Aether Captains. From having to deal with the wind direction while moving, to the various different dice rolls in combat, this is a game that’s going to demand you pay attention.

That being said, it’s not a hard game to learn or play. While the asymmetrical nature does add to its learning curve, in my opinion, it also makes the game play that much more fun. I really enjoyed playing the Navy Commander. To control a massive, behemoth that move around the skies laying waste to all in its path is just so much fun. Those Zeppelins really do outclass the smaller Sky Captain ships.

But even as powerful as the Navy Zeppelins are, there are a lot of those little Sky Captain ships to contend with. Each opponent gets to control three ships, which can not only have their damage repaired, but also be upgraded to be more powerful. One or two of those ships pecking you isn’t going to cause you to lose much sleep, but when they start swarming you, the damage will come. With the Navy Commander, it can really be a battle of attrition. Slowly your ship will take more and more damage and the fear will come.

And that’s one of the interesting things about Aether Captains, how when your ship takes damage, its state changes. You physically rotate the die to see the new values and also damage to your ship. As we were playing with a prototype copy, we didn’t get the full experience by having the cool mixtures or even ship dice (hence the paper cutouts). But I can definitely see the appeal of the ship dice. It reminded me a bit of Heroclix, where values change as your hero takes damage and the dial shows you the information. It’s definitely nice having all that information at your fingertips.

That being said, there is a lot of luck in this dice driving game. Expect to be rolling that d12 quite often. Attacking the commander takes 3 different die rolls (one for placement, one to hit, one for defense). So there is absolutely a luck factor in this game and not too many ways to mitigate that. Is that a bad thing? Depends on the type of player you are and what you enjoy in games. One of my favorite games is Star Wars: The Queen’s Gambit which is a massive, die-rolling fest. But I absolutely love it. So unless you abhor lady luck in your war games, Aether Captains should still be enjoyable.

However I do feel that the game can feel a bit overly complex at time. It can get a tad fiddly when dealing with the wind direction and moving the storm around the skies. As I said at the top, Aether Captains is a fairly involved game, so be forewarned going in.

Even with the prototype components, I definitely had some fun with Aether Captains. The rulebook we used wasn’t in its final stage, so game play was a bit rough around the edges for us. I assumed that will all be smoothed out by the time the game hits retail (or backer hands).

But if you are a fan of asymmetrical game play, than Aether Captains is absolutely worth checking out. While a few elements could be streamlined a bit, overall we had fun sailing the massive zeppelin around the skies of Arkady, wreaking havoc on those Sky Captains. Yet as powerful as that zeppelins was, the Sky Captains didn’t feel outclassed in the game, showing that Aether Captains has some nice balance. The final game is supposed to come with custom miniatures and dice that look really nice. I am looking forward to seeing how this game ends up once fully published.

If you’d like to become a backer, pledges start at $60 for the full game and stretch goals. Aether Captains is scheduled to be in backers hands in October of 2016 and you have until Monday, May 9th to become a backer. Head over today and check it out.